Oddly, for a project born from COVID-lockdown-boredom, Bristol’s Zero Again can brag a line-up including half your favourite UK punk bands from the last decade- Regret, Bring to Ruin, Warwound, & Grand Collapse. All synonymous with tight musicianship, a left-wing political edge, and a good time. In layman’s terms, kick ass punk music! Before playing a gig they’ve grasped the attention of labels in the UK/EU punk circuit. How? By dropping 2 kick-ass records, within weeks of each other. No fuckin around!
The first EP, ‘Out Of The Crooked Timber Of Humanity’ (7”, EP), is out now, on red vinyl(!) through the infamous DIY punk label Sanctus Propaganda (PL). Described as “a unique mixture of fast, and not so fast hardcore punk, aggression + frustration”, Zero Again skilfully build up this aggression and frustration with drudgingly slow drumming and broken-up dis-chords before breaking out into furious hardcore punk music halfway through. Dragging your tinnitus ass to the finish in under 10 minutes, leaving one thing on your mind. More! 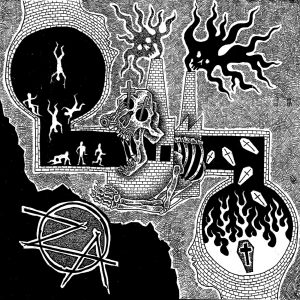 So thank FUCK for the follow up record, ‘Revert To Nothing’ (7”, EP)! Out March 19th it’ll be slapped onto decks via DIY labels such as Kibou Records. A five track EP of technically skilled, but viscerally hitting, mid-paced hardcore. Complete with ‘sad-but-true’ lyricism informed by current events. The two EPs vary in sound, but both demonstrate the dark and claustrophobic feel that they, as a band, have so quickly developed. As a band who say they aim to challenge musical and lyrical preconceptions, they’re barking up the right tree. Their sound resembles a progression on the sound- and lyrics- of the 80s anarcho-punk scene, alongside some of the short sharp elements of American hardcore. It does the job. More than that in fact, it does the job whilst providing you with a sick album cover to gawp at for the entirety of its the 10 minute or less duration. I’m telling you. It’s a classic anarcho-punk record, but it came after anarcho-punk learned to play well.