The world’s greatest melodious punk band have done the inevitable and given us a live album. This is entirely appropriate as it is the live circuit where they have established themselves along with their finely polished studio output.

‘Plasterer’ kick things off with a version played so fast that you run out of breath just listening to it. Reminding us of what an incredibly tight band they are as they meet frontman Alex’s near psychopathic demands for perfection. Then things return to an almost normal tempo with anti domestic violence anthem ‘Bin him’. ‘Lewisham’ follows leading us into a medley of absolute classics that include ‘Go easy’ which is very nearly an infectious pop song interpreted with guitars and the thoroughly bonkers ‘Horses’ which is probably the weirdest and most danceable punk tune ever written.

Alex’s tunes definitely benefit from the full band experience, which has to include keyboards and tuneful backing vocals at the very least. For this show, which was one of the annual ‘Wonkests’ we also get live cello and some trombone which makes a significant contribution to songs like ‘Horses’ and ‘Old trains’ to name but two. They can of course cope more than admirably with the more stripped down numbers like ‘She cut here finger’, ‘Donkey of the damned’ and the mindblowing ‘Je m’appelle Alex’ as a four piece but this record gives a proper feel for what is the maximum Wonk experience. 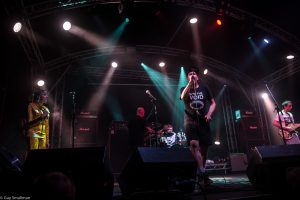 The other thing we get is Alex’s inane, if somewhat lovable, banter in between the songs as he shares his pearls of wisdom with the crowd and torments his long-suffering band mates in equal measure. Part of their charm as a live act is his complete and total unpredictability, even if he does chat a bit too much shite from time to time.

We are now six studio albums into the Wonk odyssey but as this gig happened shortly after the arrival of number five we don’t get anything from the staggering achievement that is ‘Terror’ and we are also denied anything from the first two albums which contain just as many essential tracks. So perhaps we could get a second live offering at some point in the future? The reality is this gig would need to last over two hours to do the band’s back catalogue proper justice. But as a taste of what you’re missing if you’ve never seen this lot live, this offering with so many classic tunes like ‘Nan’, ‘Awful Jeans’ and of course ‘Johnny Rambo’ is absolutely banging.

However… The live album audio bit is only half the story of this release. Because this package also comes with a DVD, that is just as awesome as the audio bit. The entire gig was filmed fairly competently from a few different camera angles, which gives the viewer a proper understanding of the complete chaos that is Wonk Unit live. The mayhem of the moshpit, the endless stage diving and the bouncers initially struggling to keep things legal in health and safety terms, before clearly giving up.

Having watched the visual version of the gig you then have the option of watching it again with an audio commentary by Alex and friends which is stuffed with anecdotes about the band itself along with various folks in the audience who feature on and offstage during the gig. Also covered are the origins of many of the songs and how they came about.

Then if that is not enough for you we have all the Wonk Unit promo videos included as well. Alex appears to explore just about every style of fim making including animation for this lot. These range from the eerie monochrome vintage weirdness of ‘Murderers Shoe’ to the hilarious slapstick comedy of ‘Nagging Wife’ a video that Madness would have been proud of.

So all in all this multiple study of wonkish delight represents serious value for money and should definitely appear in the Xmas stockings of their fans and pretty much everyone else who likes a bit of tuneful punk. A lot of live albums seem a bit pointless as they usually fail to match studio output and properly capture the essence of the live experience. This by comparison is yet another essential release from this band. Buy it!