Sugar-sweet Americana reimagined with Tate’s familiar sound, this is the perfect sad-pop album.

Songs for Sad Girls, the solo endeavor of singer-songwriter Lauren Tate, is a far cry from the punchy pop-punk of her current band Hands Off Gretel. Detaching Tate from her familiar grunge-punk sound, Songs for Sad Girls is a stripped-back celebration of Tate’s versatility as a writer and performer. Imagine the not-taking-your-shit vocals of P!nk against the lustful cinematic lyrics of Lana Del Rey and you’ll be getting close. You might want to trade your studded jacket for tassels for this one, as Tate is taking us on a 48-minute journey of sweet, bluesy Americana.

Released last month on her own label Trash Queen Records, 11 of the 14 songs on the album were self-produced by 22-year-old Tate in her home studio. There’s a certain intimacy and sincerity in this record, no doubt helped by how personal the songs are to Tate. She “wanted it to sound like a girl writing in her diary, unapologetic and imperfect like real girls are”- as soon as the opening track, ‘Mondays Make Me Feel So Awful’ begins it’s entrancing acoustic spiral, this is undoubtedly achieved.

Acoustic ballads mark the general atmosphere of the album, some taking on a country-tinged edge in tracks like ‘Miss American Perfect Body’. Others such as ‘He Wanted More’ exude a rockier vibe more reminiscent of Tate’s first solo exploration, ‘My Reflection’, 5 years ago.
More experimental tracks like ‘Baby On The Phone’ give the album a theatrical element and help establish a consistent narrative, and certainly keep things interesting. 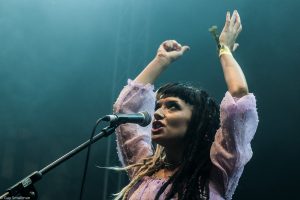 ‘He Loves Me’ is a personal highlight- catchy and upbeat, it perfectly frames all that this album is about. The line ‘they say you’re dragging me down, I know you only hurt me ‘cause you love me right?’ will play over in your head; Tate has captured pop at it’s best in this track.

Tate describes 1950s era love songs as a strong inspiration on this album, which shows most obviously on ‘Naturally Born Bad’- a playful yet polished tribute to midcentury doo-wop ballads.

It would however be doing Tate an injustice to describe this album as just lustful sad-girl pop, as she consistently addresses serious social issues throughout, such as abusive relationships, self harm and gun violence. Tate writes from her own experiences and beliefs, and this shows in her work.

Tate’s sound has certainly matured since ‘My Reflection’, and Songs For Sad Girls proves that Tate is just at home in bluesy pop tracks as she is in pop-punk bangers. This album may not have a really obvious anthem, but it is a strong body of work that demonstrates the extent of Tate’s eclectic imagination and talent.