Screaming Toenail first wiggled our ear holes in 2015 with Territorealities. A couple of years later they put out Food Chain (Demo) (2017) an equally good EP, again demonstrating their signature blend of riot grrrl, post-punk and grunge. 2020 however, has been their most active year for “putting stuff out”. They released their 2 track single IOU/Sever on the 3rd of July 2020, which was followed up less than a month later by the album I’m reviewing today, Growth. It’s almost as if they’ve had a lot of free time on their hands… for some reason.

So before we get into it, Growth, came out on Hell Hath No Fury Records. They’re a UK based feminist punk label (that’s right, it’s ladies night!) who have released a load of great bands, such as Cecilia, Perra Vida, and Poisonous Cunt (you may remember them from my review of their album). Their mission statement is to, “[provide] a platform for DIY musicians who identify as womxn, non-binary and queer”. So in other words, they are not only a great label for Screaming Toenail to be on, but a very logical one too! 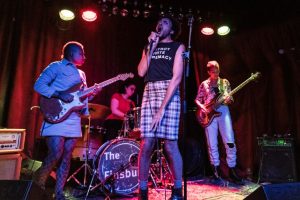 Growth shows Screaming Toenail refining their blend of post punk, grunge and riot grrrl to suit a longer length release; creating numerous atmospheric grunge jams that you can kind of get lost in for half an hour or so. I thought that the post punk influence seemed to take a backseat in the actual structure of a lot of the songs, but instead lead guitar parts payed that kudos.

Songs that stood out to me included White Saviour, which discusses colonial mentality in the media, whilst simultaneously being hella catchy; and Sever, an atmospheric post-punk track about the writers experiences outside of heteronormativity- also I particularly liked lead guitarists parts in this track, a little bit dark-wave esque. My favourite track on the album is Giant Woman, a patriarchy smashing banger which lists inspirational ladies that we should all take 5 minutes to google.

Something that really strikes you when researching Screaming Toenail is just how much the ideas they promote steer direction of the band; after trawling their social media you can see that they pretty much exclusively play shows to benefit or promote feminist, queer, anti-racist, and post-colonialist causes. Meaning they’ve put their money where their mouth is. And no surprises either, considering the sheer level of conviction from this band.