The album is a painful dump of spite and anger which comes in strong with “People In Glass Houses”; setting the tone right away with a gigantic screech of uncontrollable rage, amongst violent guitar stabs, and fast pace hardcore punk drum beats. Repetitive, yet tempo swapping, Neanderthal knuckle-dragging riffs that scream “fuck you I’m pissed off!”

Lyrics throughout the album are real, painful and solid; paying attention to different lyrical structures whilst simultaneously fobbing it off and taking a more deconstructive approach. At points throughout the album subtle optimism bleeds through, albeit cryptically, and without breaking the bands raw and nihilistic aesthetic.

Make Me A Sandwich is a refreshing contrast to the prominent, “mid-tempo throughout”, bands which are thriving at the moment in the UK punk scene. Stand out tracks include “Sick”- in which quick time vocal delivery is suddenly yanked away into repetitive screams of “I’m sick!”-, and “Enough”- which starts with an almost WKSJ?-esque 1 note lead guitar line. After the first few tracks some solid musical curveballs come out. “SFB” resembles an OI!/streetpunk song, and the middle section of the album- spanning from “Pills” to “Narcomaniac”- slows to a mid tempo, which breaks it up nicely. It’s almost as if they’re giving everyone a chance to rest and resume moshing at the end; you know, like you do in a live set. “Moregasm” finally breaks it down to an even slower pace, before being quickly picked back up again by the 6 seconder, simply- and I hope accurately!- titled “I Can’t Stop Queefing”.

Albums are hard to end, and Make Me A Sandwich just ends it like… that! The only things that, really, I feel the album needs is for those awesome bass parts to show off a bit more, that and a smidge more lyrical pronunciation would have helped in parts. All said and done though, it leaves you hungry for more. Exactly how you should feel after 25-ish minutes of kick ass punk rock, or your first hit of crack cocaine. Either way, an impressive effort at sustaining the energy and entertainment levels, of Enema Procedure, over the length of an album release. 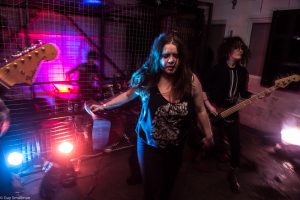