It is the eve of a fuckwitted Tory Brexit in North London and a lucky few have gathered to soothe their tortured souls in the basement of a King’s Cross pub. The place is packed and Robb is on a mission to pack in as many tunes as possible before dashing up the road for the last train. The amplification and lighting are minimal. The set that follows is most definitely not.

Kicking off with the bashful optimism of early melody ‘Red & green’ he instantly reminds us all of what a tuneful chap he is, before reminding us further of how prolific his writing is by going straight into a shiny new track in the form ‘Your little Empire’. A commentary on those in power in the age of Trump and de Pfeffle. He has literally hundreds of numbers that we’d love to hear tonight. But being one of those artists whom responds to local and world events in song on a daily basis he concentrates largely on the newer and most relevant material. 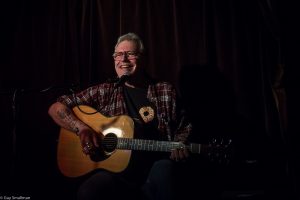 ‘The Kreuzberg Sisters’ from last year’s Eurotopia album is a classic example of how his lyrics can swing from the straightforward to the utterly surreal. It’s an anti patriarchy anthem on acid with a bit of history chucked in. Also from the last record we get the thoroughly barking ‘Carnival song’ with its joyous German chorus, ‘My last night in Montemarte’ a melancholy appraisal of his feelings about leaving the EU and the slightly bonkers, observational story telling of ‘Coincidence on the circle line’. Which marries a pigeon to Joe Strummer as only the hyperactive mind of Robb could manage. His words take us on the most unpredictable of journeys without the need for any magic mushrooms.

Eurotopia was of course recorded with his full band The Irregulars but created on his knackered acoustic. So each bit works beautifully in a stripped down solo performance which logistics dictate is how we’re generally used to seeing him. ‘The work is never done’ also translates splendidly to a single guitar as he recounts watching refuse workers in Louis Michel as only a lefty folk artist could.

‘Popular music’ from Humbug 19 (his last compilation) is perhaps the only bit of the proceedings that strays into the realms of withering cynicism. Well we don’t like being let down by our heroes do we? So if the likes of Iggy Pop are going to sell car insurance they can expect some stick for it. Meanwhile if supremely talented songsters like Robb will forever find themselves struggling to break even from their art then they’re surely entitled to moan about it once in a while? 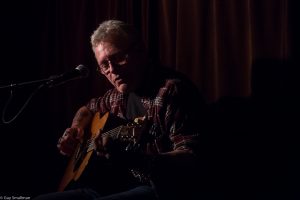 The spine tingling ‘Once Upon a Time on the Road to Eurotopia’ contains some lovely finger picking guitar work which remains one of his specialities and warms up our hearts nicely in preparation for ‘Goalkeepers’ a song about his dad from the epic and deeply personal creation that was Ordinary Giants (2018). A triple album that charted a hundred years of family history, two world wars and a fair bit of football.

We of course get plenty of the overtly political to balance the intimate. ‘At the siege of Madrid’ and ‘The Edelweiss Pirates’ inject some welcome anti fascism to the proceedings while his song about the Grenfell disaster remains one of the best musical interpretations of the mass murder of West London’s poorest.

‘All mouth and short trousers’ takes another swipe at our unforgivably embarrassing choice for a Prime Minister. A Tory majority will if nothing else generate a shit load of top music from artists like this over the next four years.

We could watch him all night but his train beckons so ‘Brown and black and the union jack’ and ‘Be reasonable demand the impossible’ is an uplifting end to a top night that could have lasted another hour or two without even scratching the surface of his vast back catalogue.

Robb remains once of the best kept secrets in political folk music and as he rightly refuses to stream poor quality versions of his art on those rip-off platforms; you’ll just have to go to his thankfully frequent shows and buy the albums on CD like good old days.