In 2013 he collaborated with others to release GENTLE MEN, a musical journey through the First World War as seen through the eyes of his own grandfathers. Now he is bringing out ORDINARY GIANTS and exploring further his family tree from 1918 to the present day. Encompassing the surrounding history of the Spanish Civil War, World War Two, the creation of the welfare state and the rise of Thatcherism, it is an epic three-album trilogy with over fifty songs and contributions from over thirty other musicians and political figures. Like its predecessor, the narrative flows through the eyes of members of his own family & ancestors.

Sat with Robb in a Clapham Pub I ask how this project first developed?

“Originally, like the GENTLE MEN album, it was focused upon the war years. But I realised that it was probably more important that after the war we created something called the ‘Welfare state’. It wasn’t on the same level as countries in the Eastern block like Poland or the GDR but it was part of that same wave of aspiration, for a better, more just society.”

“Other places had revolutions. But ours came out of war and calamity and we saw the establishment of the National Health Service, and the state education service that was supposed to benefit everybody. So as the writing developed, more and more of the story seemed to be focused upon the post-war years and the creation of those structures and thinking about what it represented.” 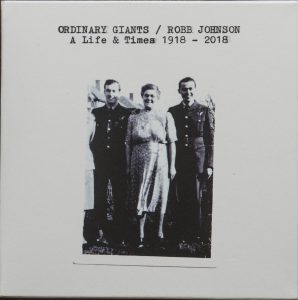 “So, the album I hope looks at those issues as well as the war. It sees the Second World War as both a continuation of the First World War but with an added dimension of ideology. I think that if you look at both WW1 and WW2, they are part of the same narrative. The failure of capitalism and the consequences of imperialism. We’re still dealing with that now in the form of neoliberalism. It’s part of the same struggle. Those issues are still unresolved”

“But for a while, the Welfare state was the British attempt to deal with those issues and to redistribute power in favour of ordinary people. It might not have achieved that in all practical senses of the word. But then the bad guys never went away. We never managed to shut down the public schools, that was a big mistake. We also let the fucking doctors go on strike and retain private health care from the word go. The decline of the Welfare State is not accidental. I hope these songs present the attacks of the Welfare State as being deliberate actions of the right wing to stop people having fairer lives”

I move on to ask about the impressive and quite surprising list of collaborators who appear on this record?

“I’m extremely happy to say that I got more than 30 people contributing to ORDINARY GIANTS and everybody brought an immense amount of creativity, often that I wasn’t expecting. Everyone is creative in their own way and has the potential to add something to a picture they’re in. On this, we have people who are, for want of a better word, quite well known.”

“We’ve got Justin Sullivan from New Model Army. He does what you’d hope Justin would do. He provides an absolutely wonderful vocal that is perfectly right for the song about the oncoming disaster that is Thatcherism. And we’ve got Tom Robinson doing a brilliant impersonation of an upper class fascist from the early 1930s.”

“Also we have Francis O’Grady (TUC leader) doing what I describe as ‘sub-Stanley Holloway monologues’. This is about my Dad’s life & times. He was born in Fulham and raised in Heston so he was never on the Jarrow march and he never went to Spain to fight and of course, he never went on the CND marches either. But all these things are important so I invented this character called Lou who does do all of those things. She’s based upon my great aunt Gladys who didn’t do those things either. But had the attitude that might have done. She was the only one in my Mum’s family who openly voted Labour. She was a Bolshevik and obviously beyond the pale or at least beyond Ringwood. So the Lou character does all those things. She goes on the marches and she knows all the statistics. So she provides the background, context and leftwing analysis. And playing Lou, Francis O’Grady delivers this perfectly.”

“I thought that in the interests of BBC-like balance we’d need to have some right-wing fuckwit deliver their perspective so my great friend Alan Clayson provides the voice of the Utter Swines. Who are Major Utter Swine, Toby Utter Swine and Hugo Utter Swine who obviously is a member of UKIP. And throughout this the Utter Swines raise their heads from their Daily Mail and grunt and complain about how Mosley gets stopped at Cable Street while also celebrating Scargill’s arrest at Orgreave. In the last one, he actually phones in his contribution with Nigel Farage, lost somewhere, trying to get into a studio to record their riposte to all this left wing nonsense on this album. Their riposte is a song called “All you need is tweed” only, of course, they can’t find the studio.”

“We’ve got Phil ‘Swill’ Odgers from the Men They Couldn’t Hang he plays my Dad and he’s just brilliant and he plays alongside Miranda Sykes from the RJ Three who plays my Mum. The two of them connected so well they ended up doing two duets instead of one.”

“My dad was a teacher after the war, which was in itself kind of amazing because for most of the 1930s he was bottom of his class. And then he took the opportunity of the welfare state to retrain as a teacher because he knows exactly what it’s like to be overlooked. That’s why he was such a good teacher and his class used to call him ‘nobby’. Because he was so skinny after he came from the war. He had been a prisoner of war and spent over two weeks being marched around Germany towards the end. He lost most of his teeth and was incredibly bony so his kids all called him ‘nobby’ because his knuckles were so knobbly. So I wrote this song about ‘Nobby’s class’ and Steve White sang it. It was such a good performance that I decided to bring his character ‘Tony’ back towards the end to explain what is going wrong in 2010 with Blair & new Labour.”

The album covers a huge amount of political ground. I enquire if there is a strand which unites all the different characters and events?

“The general theme of the album is slow progress. How we move forward. How we get beaten back and how we keep going and how we keep coming back. So it ends on a positive note with the election of Corbyn as Labour leader and the enthusiasm that has unleashed for the values of the 1945 Atlee government.”

“The values that meant that those young men climbed into those bombers every fucking night knowing that they wouldn’t be coming back. I have a very ambivalent attitude towards Bomber Command. I think it was used by Churchill brutally to take out whole cities like Dresden and Hamburg and these were kind of war crimes. Except that the young men involved had a 44.4% death rate. The only other WW2 service with a worse death rate was the German U Boats. We’re talking about Somme statistics here.”

“What made those young men get into those aeroplanes was that they wanted to defeat fascism but they also wanted to go back to a land fit for heroes. Something that their parents didn’t get when they came home in 1919. So there was an urge to have a better society. That is what I hope these songs celebrate.”

“I think we’re seeing a reawakening of all those ideas thanks to the little spark that is the Corbyn leadership. Those ideas are still a way forward to getting a better society. On my way here I had two people begging me for spare change. No one should have to sit on the street and do that. That is why Corbyn’s leadership is so important. Because he is the only leader who for ages is saying ‘this shouldn’t happen’. We can have a better society than the one we’ve got now. Which doesn’t have to be a drift towards the middle ground and being nice to the fucking bankers & celebrities. We can do better for ourselves!”

ORDINARY HEROES is out now on Irregular Records and available from Discovery Distribution and Amazon. But don’t buy it from Amazon because they avoid billions in tax and treat their staff like shit.