The absence of live music during the pandemic has been hard to bear. The shared experience, the rapport with the artists, especially those performers who choose to write songs not about themselves but about real lived experiences of ordinary people.

Of course that is nothing compared to the deeper losses so many have had to bear during this plague, overseen by the billionaires who don’t care about anyone’s lives beyond those who keep them in their place.

Robb Johnson and the Irregulars new album, Pandemic Songs, though, really hits the spot. Each of the songs feels intimate – like a live performance. They tell unpalatable truths about our evil times, sometimes directly, sometimes allegorically, but with characteristic humour and irony. The album opens with Saint Mary, ostensibly about a pig sent to market. But a chain of events, lack of care, myopic decisions, result in plague. When emergency action was needed “the bourgeoisie hid in their beds/Their accountants stopped counting the dead.”

Johnson sings of the penny finally dropping. On 422, he says: “You can see the sunlight dancing down the street outside your door/But the the world outside your window/
Isn’t your world any more.” Meanwhile, the government promises a solution. In his take, only marginally adjusted, they assure us that any moment, “we’ll have British ventilators” and advises: “Just hold your breath till then.”

89p is a playful and enjoyable track mocking our “brave Prime Minister who doesn’t like to work weekends”. Though if we think we‘ve got it bad, we are surely fortunate that we are not in America. Track 7, Disinfectant reminds us that there, they are ruled by “a humble billionaire/sent to inspire us/to share the word of God/with the stars of porn/and kick the ass of corona virus” Count your blessings. 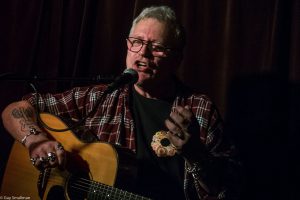 Perhaps, the most poignant lyrics are found in Lockdown Jokes and Stories which lays bare the life and death of frontline workers drawn from marginalised communities exposed to the virus daily without adequate protection. “She only had one mother…”; “They only had one father”; “She spent her lifetime teaching children…” recalling the deaths of Belly Mujinga, Mervyn Kennedy and Louisa Rajakumari. Meanwhile the likes of Dominic Cummings do as they wish, literally “getting away with murder.”

Amid the sadness, enforced loneliness and government deceptions, subtle changes were occurring. When we finally emerge from the pandemic we can and must find new ways to live. On track 12, The Days We Don’t Forget Johnson sings:
“You could hear the sound of birdsong/and the silence of machines/of fragile, small and beautiful/the echo of our dreams”. And he urges us: “Let us not return to those businessmen as usual but remember what we’ve learned.”

The final track highlights another important memory to act on. Things did not grind to a total halt with the pandemic. Everyday injustices continued to occur. Across the water, on 25 May this year, one more police murder of a black man took place. George Floyd.

Heartfelt songs written in extraordinary times and performed beautifully. Thank you Robb Johnson and the Irregulars!