Happy nuke year everyone and what better way to take our minds off the orange shit-gibbon starting World War Three than a bit of free punk rock? Garageland have been providing an essential monthly service to mankind for a while now, with top acts playing for nought in venues that actually serve decent beer at reasonable prices. It is actually hard to think of a better way to start a new decade given how the last one just ended.

First up are the screaming howl of rage that is Circle Nøne fronted by the magnificent mountain of molten madness that is May. They’ve brought their own crew of hyperactive punklings who proceed to tear up the dance floor and make multiple and frankly valiant attempts at crowd surfing to the visible unease of a lone (but rather big) bouncer. Opener ‘Death’s grip’ is a pounding hardcore tune offering a lyrical journey into the realms of utter pointlessness. ‘Gone with the binge’ is glorious exploration into the world of excess with some seriously thrashing guitar. ‘Power abuse’ is pretty much a surf-core anthem that rages against the man underpinned by a meaty bass line that provides the bedrock for words that would get you jailed in some countries. We also get a very respectable Minor Threat cover chucked in. They’re a ferocious life experience and we’re looking forward to the new stuff that they’re recording. 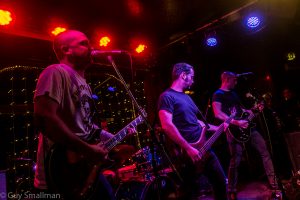 Then it’s time for Priorities the kiwi-fronted Athens street punks playing their first ever gig in the UK. Singer Liam has been stressing over an absent guitarist (which means he has to fill in) along with breaking in a new drummer. But he needn’t have worried. He is very competent axe-man and the new boy behind the kit is doing just fine. ‘Weekend warrior’ is a stomping call to stop giving a flying fuck about routines and enjoy every day as if it is our last. On a similar theme ‘You better shoot’ is another life affirming tune that orders the listener to grab those opportunities by the balls instead of wondering what might have been. It’s a catchy number that is more Clash than Oi and gets the merry throng nicely warmed up. ‘Keep on fighting’ is a proper call to arms for the disposed and ‘For my mates’ is a nostalgic trip back to teenage laddishness built on a foundation of thunderous drumming. They of course finish with a Sham 69 cover. Come back soon lads!

Sadly Circle None’s crazy gang have been refused readmission to the venue for drinking cans outside or something (boo!) but the place is still pleasingly packed for headliners Left For Dead who waste no time in reminding us what an incredibly tight band they are. Simon remains one of the best metal guitarists on the punk scene and there is no better advert for his precision than ‘Never wanted’ a track that builds upon wave after wave of fast and faultless riffs until it reaches it’s crescendo and the beautifully tragic vocals kick in. Continuing the theme ‘What did you just say to me?’ reflects the pent up aggression within us all before we get out first new track of the proceedings. 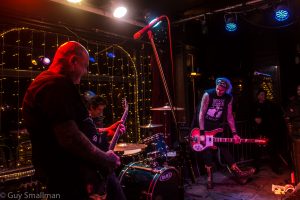 ‘Not today’ picks up where the last album left off with its melodious lead line and sing along chorus. They have an impressively complex sound for a three piece and slam a tuneful storm of riffs and beats into the final composition. It’s a bit like being smacked in the face with a sledgehammer fashioned from every bit of punk and metal that has ever stuck in your head for the right reasons. The battle cry for unity and solidarity that is ‘Support’ remains a firm live favourite with it’s chugging guitar that drives the song for almost six minutes. From the last record we get ‘One man riot’ (we all know one) and ‘City of punk rock’ an achievable utopia that we can all aspire to. Then it’s time for more new material in the form of ‘Two generations’ which sees the band nail their anti fascist colours to the mast yet again with a look back of at our grand parents narrow escape from tyranny. ‘How many people?’ asks yet more questions that our excuse for a media seem incapable of contemplating. We truly live in times when only punk rock can make sense of the world.

The closing medley of songs brings us ‘Humanity’, the downbeat study of what an absolute virus we really are, the raucous testimony to the joys of booze that is ‘Hops and Barley’ and the brutal celebration of the death of loathsome Nazi Eugene Terra Blanche. A perfect way to commence a truly uncertain year.