After two sets of COVID postponements the iconic Futerama Festival is finally back on track with an adjusted line that features one of its original bands headlining the Saturday night. New Model Army played the original festival back in 1983.

The original Futuramas were a series of groundbreaking and innovative post punk and electronic music festivals in the late 70’s and early 80’s. They were the brainchild of one-man, John Keenan, a legendary Leeds promoter who has put thousands of bands on over 40 years at his famous F (Fan) Club. In 1979, he decided to create a 2-day festival at the Queens Hall in Leeds, he put on all his favourite up and coming bands and make it the first alternative indoor festival in Britain. Nearly all of Britain’s most important and influential independent bands played these festivals, many of them went onto considerable success in Britain, Europe and the US!

The roll call reads like the greatest who’s who of alternative music, it includes Joy Division, New Order, Echo and the Bunnymen, PiL, Killing Joke, Teardrop Explodes, Bauhaus, The Fall, Gang of Four, Sisters of Mercy, Theatre Of Hate, Psychedelic Furs & even a fledgling U2! The Futurama festivals caught the zeitgeist perfectly. They not only put on many female fronted bands including Siouxsie and the Banshees, Young Marble Giants, Bow Wow Wow & Altered Images but also many of the new wave of electronic & synthesizer acts including OMD, Soft Cell, Cabaret Voltaire, Simple Minds, Clock DVA & Vice Versa who later became ABC.

This years line up is very much in keeping with the spirit of original festival with a thoroughly eclectic slate of acts old and new. Full line up: 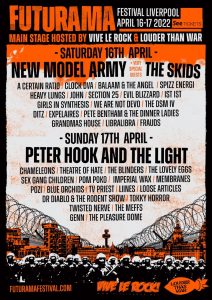