There are proper feelings of anticipation in this little known, but absolute gem of a venue near the old Southampton docks. It is Tuesday night and the place is rammed as the New Model Army family have assembled to welcome the latest chapter of a 39 year live experience that is their addiction. The most recent album ‘From here’ has been well received by the ever-loyal following and now they want to hear it live and loud, as its creator intended. 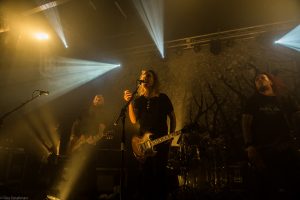 Opening number ‘One of the chosen’ lures the crowd into the dark mind of founder and frontman Justin Sullivan as he explores an imaginary life trapped in a cult. It boasts what has to be the most sinister bass intro in the history of rock music and builds into a crescendo of molten zeal that could melt the soul of even the most committed atheist. Then we’re straight into ‘Never Arriving’ and ‘The Weather’ both drawn from the new record and projected by the dominant rhythm section that has defined their sound from the very beginning. The former is the latest thumping episode of Justin’s ongoing obsession with our ancestry – past and present. The latter is a classic upbeat bass-driven army stomper that stares into the rising sun as it ploughs through a range of drama filled landscapes.

Then the place properly explodes for ‘The Charge’ a blistering, thunderous war hammer of a song that recounts the bitter battles of decades past, transporting us back to those utterly mental gigs of the eighties and nineties. The venue security are visibly unhappy at the site of family members scaling each other’s shoulders but seem unwilling to intervene as that would mean the awkwardness of having to lecture their elders. Army pits are as hectic as ever with a legion of mainly middle-aged maniacs crashing into each other like a bunch of heavily tattooed human pinballs. They’re not making much effort to pace themselves even though many of them will be hopping across the English Channel tomorrow to attend sold out dates in France and Germany before heading east to Poland and Hungary. If this band carry on much longer they’ll need the St John’s ambulance in attendance, like those TV wrestling matches of the nineteen seventies. 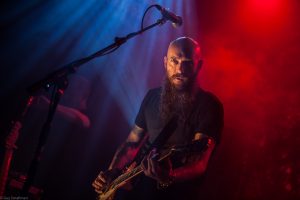 The enduring appeal of New Model Army is best explained as their refusal to conform to anything other than their own musical evolution while providing the most incendiary live experience imaginable. Justin has always assembled the most skilled and passionate musicians to illustrate his work and the present line up driven by Michael Dean on drums and Ceri Monger on bass is the most evolved to date. Add to this the almost psychopathic precision of Marshall Gill on lead guitar with the additional keyboards, vocals and guitar of Dean White to complete the live mix and hearing – really is believing.

We get no less than eight tracks from the latest album tonight, seven of them played live for the first time. The symphonic power of ‘Passing through’ which opens the latest LP, is yet another number that makes perfect sense played live at a proper volume. ‘Maps’ wraps around the listener like a giant octopus pulling you under its waves of sound into the very depths of Justin’s orchestral ocean. 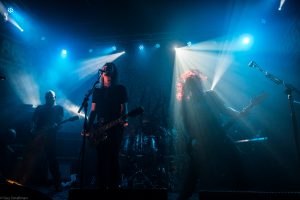 Two songs from the current material have become instant classics and absolutely shine. ‘Watch and learn’ is an addictive power-ballad with sing along lyrics which explore the idiocy of our existence. ‘Where I am’ is a stunningly beautiful examination of life, love and human experience on the bleak margins of our fucked up world.

After fourteen albums they have a wealth of hidden treasure to enchant the faithful flock along with the hits. Tonight they dig up the dreamlike ‘Wipeout’ from 2000’s EIGHT along with ‘Believe it’ and ‘Fate’ from 1993’s Love of Hopeless Causes. ‘States Radio’ remains a firm live favourite with its cutting commentary of the US airwaves and the combined guitar work of Marshall and Dean in full effect.

Justin introduces 1986 single ‘51st State’ as history repeating itself. An observation of how the Johnson – Trump dynamic matches the horror of the Thatcher – Reagan thing when the band were ascending the charts thirty years ago. Final number ‘Angry Planet’ charts our unstoppable march towards Armageddon with its beautifully simple collection of pulsing machine-like riffs that drives the narrative to its blazing conclusion. The pit is pressure cooker of sweaty flailing limbs and security are at peak-non amusement. 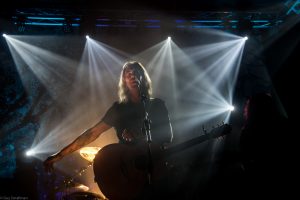 After a brief pause for breath the encore kicks off with ‘Great disguise’, one of the quirkier new songs, before launching into ‘Courage’ a much cherished and seldom played b-side from the eighties. Final track ‘Get me out’ sees the dance floor detonate one final time as the band, whose combined ages must be well over two hundred years, leap around the stage like a gang of teenagers on energy drinks.

Next year the Army will turn forty and what plans are afoot to mark this milestone remain unclear. Right now they are on top form even by their own very high standards and they return to the UK next month.