Witch Fever bring a load of new material to tonight’s gig and plough through it like they’ve been playing it for years. They have an impeccably tight live sound with the chunky, almost metallic sounding, bass lines of Alex welded to the thunderous beats provided by Annabelle. Alisha’s guitar spirals through a range of creative metal riffs while retaining a rigid discipline. Meanwhile the soaring vocals and explosive stage presence of Amy completes what is a uniquely polished live experience.

Their songs pull together a range of sounds from the abrasive buzz saw chords perfected by the likes of Killing Joke to the spacious, doom-laden melodies of Black Sabbath. But it is their attitude, which seems drawn from the DNA of Patti Smith and Siouxie Sioux through to the Savages, along with a collection of brutal yet accessible tunes that makes this band unmissable.

‘In the resurrect’ is a beautifully catchy mish mash of hip hop and scorching punk which sees Amy’s vocals stray from a cocky chatter to a symphonic harmony. New song ‘Bully Boy’ builds into a crescendo of queer feminist rage and gets dedicated to the lone dickhead in the crowd who’s been dumb enough to attempt a lewd and highly unimaginative heckle. Amy’s response has already reduced him to dust with little effort and commendable efficiency; this number scatters what’s left to the four winds.

The finale of a teasingly short set is latest single ‘Reincarnate’, which chugs straight into the realms of rock classic. I seriously hope these no nonsense northerners will venture south again before long.

I’m told Bob Vylan smashed it at Standon Calling festival last weekend and there is certainly much expectation in a very packed Joiners tonight. It is the first date of a tour that should have happened over a year ago when THAT SONG finally got them the attention they deserve.

As well as being one of the most original and exciting new punk bands around, they can rightfully claim to look & sound like no one else as the cliche-ridden rock rule book is pretty much torn up and thrown on the fire. The engine room of the show is Bobbie who pounds his drum kit above a killer backing track. The rest of the stage is more than filled by the bug-eyed whirlwind of kilted chaos that is Bobby (confusing isn’t it?). 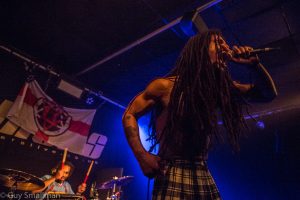 The rage begins to build with opener ‘Down’ and then explodes into the pounding gammon-safari that is ‘I heard you want your country back’. These lads don’t fuck about when it comes to taking to fight straight to the ugly face of the oppressor.

Every song is roughly two minutes of incendiary social commentary belted into the ears of the audience with a naked aggression and intensity that just leaves everyone’s jaw on the floor. Even the quieter tracks like ‘England’s ending’ pack a lyrical punch that insights the listener into feeling that action is required by all means necessary. Fortunately those demonic eyes, that seem to scan the very soul of everyone present during the songs, are also accompanied by a warmth and rapport with the merry throng that leaves everyone feeling like they’re spending the evening with trusted old friends.

For me ‘Northern Line’ is the stand out track on the latest album and it does not disappoint live. It is a rolling steam train of a rock anthem that examines the paranoia and fragility of our existence in these troubled times. This band can help us study the complexity of our own frailties with the same competency as inciting us into a good old-fashioned riot. Similar themes are explored with ‘Save yourself,’ which begins gently enough before morphing into a banging tirade of screaming hard core.

‘CSGB’ (chat shit get banged) is another absolute highlight, which immediately brings back fond memories of that glorious and much memed moment when Richard Spencer got twatted by ANTIFA while spewing his Nazi bile at the inauguration of Trump. ‘Pulled pork’ is a boiling furnace of pure rage that leaves no racist stop & search or suspicious custody death unchallenged. The anger witnessed on the streets of the global north after the murder of George Floyd has yet another top tune to articulate its bitterness at injustice wrapped up in police uniforms. 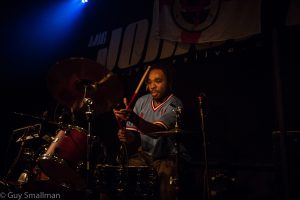 Of course all these polemics would be meaningless if the songs didn’t match the sentiment. However their hybrid sound, which plunders the most compelling dynamics of everyone from the Dead Kennedys to early Public Enemy, provides an indestructible foundation on which to express their grievances drawn from their own lived experience. Describing them simply as ‘grime-punk’ is a bit lazy to say the least.

We do get at least one opportunity to laugh out loud as the band cast their critical eye over those patronising, liberal leeches who think that white privilege is somehow cancelled out by reading The Guardian once or twice a week. ‘We don’t care’ is a truly hilarious anti gentrification diatribe that should send every tedious tosser with ironic tattoos scurrying back to Surrey.

Finally an extended version of ‘We live here’ raises the roof and sends the sweaty gathering into a total frenzy of raised, antifascist fists before being released smiling and exhausted into the cool night air.

Both of tonight’s bands offer a powerful antidote to the awfulness and insecurity of our post-COVID world while overflowing in creativity and belief. We should probably just put Generation Z in charge of absolutely everything right now and let them get on with it. 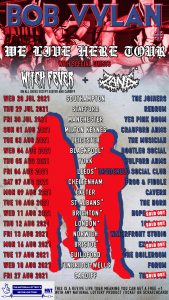