London based grime-punk act Bob Vylan have released an extremely welcome and gloriously angry tune to help keep us focused during these strange times of isolation and uncertainty. The song which encompasses everything from memories of childhood to the murder of Stephen Lawrence shoves it’s message into the face of the average racist like a musical knuckle sandwich of epic proportions:

Speaking to Final Hours at a safe social distance provided by the internet they said:
“Right now we are occupying a strange space in time. A time where people world over are being made to feel as though home is not home any more. A time where some are calling for walls to be built, instead of torn down. A time where people that have lived most of, if not their entire life in a single country, are being deported to foreign, unfamiliar land because it has become easier to blame those that appear to be different than it is to admit that there are holes in the fabric of the nation they reside. We Live Here is a call to arms. It is a reminder that while there are plenty of us that look, sound, and appear different due to a multitude of factors used to divide, this ugly, broken, unhinged country we call home is ours too.”

This tune could not be more welcome at a time when the far right are unsurprisingly trying to exploit the pandemic crisis for all it is worth. When COVID 19 was first identified in Britain there was an immediate upsurge in anti Chinese racism which manifested in physical attacks in some cases. Far right forums are turning a high infection rate seen in the Jewish community into the usual conspiracy theorist drivel that they are known for spreading. Meanwhile celebrity dog shits in human form like Tommy Robinson, Katie Hopkins and former UKIP leader Gerrard Batten have been sharing a fake news video that tells various lies about the Muslim community spreading the virus.

One thing that these vermin can’t undermine is the public gratitude towards our National Health Service and a new found awareness of how reliant it is on the skills and expertise of immigrants and people of colour. The first seven frontline NHS workers to die from Coronavirus, having given their lives to the service of others, were all of South Asian, African and Irish heritage. Five of them were practising Muslims. Their sacrifice will be honoured long after the likes of Robinson & Hopkins are little more than a bad and embarrassing memory. 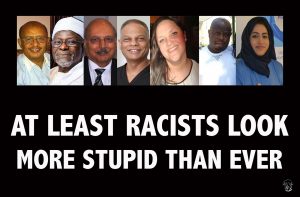