When I initially set out to write this review I droned on about how Fixer Upper was perhaps the defining song (along with Fishing by Sports Team obvs) for me during those endless days of the first lockdown in 2020. This confused me as I always thought Peanuts was the first Yard Act song I heard. I now think I might actually be remembering The Trapper’s Pelts. Unreliable narrator, and even worse researcher, though I am it’s true the warping of time and memory is familiar and increasingly tedious to many of us now. All I know is in that most unbased of years I spent many days gazing at blues skies out of my kitchen window, patiently waiting for Yard Act to come on Radio 6 as many times a day as possible. The excitement for this new band, and others, was tinged with the melancholy I felt for live music, knowing me and Carrie (my Girl from Greggs) would have a seemingly interminable wait to see them live. I worried endlessly about the impact lockdown would have on bands, cherished or yet to be discovered, and the uncertain fates of the venues that make it all possible. Better days did come, and continue apace, as I had the pleasure of seeing Yard Act twice in twenty four hours. First at Rough Trade East, and then at the 100 Club on Oxford Street courtesy of the iconic Sister Ray Records. 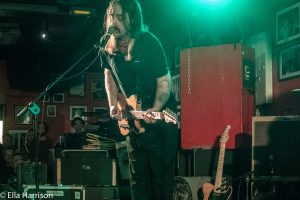 Before this, however, I brought that pent up excitement of a near year and a half wait with me when I saw them for the first time at End of the Road festival in 2021. Singer James Smith (who I still thought was called Graham at the time) introduced Fixer Upper as a song that would be relatable to the EOTR crowd as it’s about a ‘two-home owner.’ Devastating, and accurate, badinage. I was curious how their recorded material would translate live- turns out Smith’s ‘talk-singing’ (no German loan words from me, they’re held up in post-Brexit customs) and the often darkly languid rhythms take on a whole new life on stage where are they are played with urgency and conviction, underpinned by that most elusive of qualities- raw talent. Alongside Smith, Yard Act consist of bassist and founding member Ryan Needham, drummer Jay Russell and guitarist Sam Shipstone, whose great style always brings to mind Alexander Hacke of Einstürzende Neubauten. Instant credibility. Following their EOTR set, Carrie duly secured us tickets to Mutations fest in Brighton to see them again where they totally smashed it once again, and managed to draw not only vivid life out of a previously subdued crowd but also an array of tips in the form of small change and a bottle of poppers. When in Rome!

First up for this special weekend is a Friday noon show at Rough Trade East. Our selfish and puerile hopes that the event, due to its weekday afternoon timeslot, would be relatively empty- thus facilitating a one on one audience with the band resulting in them joining us at the Pride of Spitalfields for several pints, abundant banter and lifelong friendship- were dashed immediately when we had to queue to get in. The queue, believe it or not, was even longer than when we went to see Gary Kemp in conversation with Martin Kemp (where they didn’t even do a meet and greet!!!) No, our fellow music lovers chose to sacrifice their own productivity and our once-great nation’s feeble economic recovery for the live music cultural renaissance and a special yellow vinyl. They made the right choice. 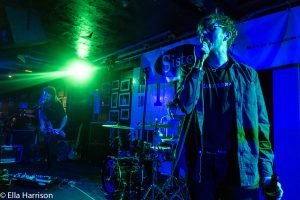 The sets are different each day as the band allow the crowd to dictate what they want to hear. This produces a special moment at as they accept a request to perform the gorgeous Tall Poppies, which comes in at over six minutes, despite not having yet memorised the lyrics. Aided by two sheets of YA headed A4 paper, Smith flawlessly delivers on this moving vignette of a life lived with unexpansive, but no less valid, horizons. There is no repeat of this at the 100 Club the next day as the lyric sheets are not to hand, and I am once again grateful for having daftly booked the Friday afternoon show by accident while trying to book the Saturday Sister Ray signing. Broken clocks and all that.

Another request comes in, this time for Dark Days EP track The Trapper’s Pelts. This proves to be a real high point in the set as the band deliver an intense, menacing performance of driving guitar and pounding bass that I find intoxicating and which exceeds the recorded version of the song, already brilliant, in every aspect of its delivery.

Another variation on the setlist for Rough Trade is the inclusion of new album title track The Overload. One of my absolute favourite tracks of 2021, it routinely gets stuck in my head. Not just because it’s catchy.. in fact mostly because when Smith sings ‘hold your horses’ my mind immediately jumps to the ribald Biggie Smalls banger Just Playing (Dreams)- where the man himself invites you to find out ‘who the boss of intercourse is.’ To this day I can still never remember what line comes next in the Yard Act song, and my brain would reject any attempt to learn it. It helps to talk about it. 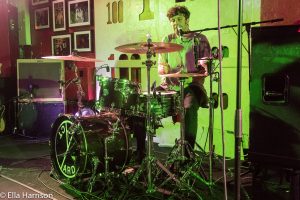 The big show of the extended weekend was their appearance for the record store Sister Ray, and a different coloured special vinyl, at the 100 Club on Oxford Street. It’s an excellent venue, especially for bands on the cusp of much larger spaces, that delivers both on atmosphere and aural quality. The intimacy and intensity is always heightened by the much-lauded “legendary” nature of the club itself and the array of epoch-defining talent that has graced that stage over its many years of existence. I was determined not to miss the opportunity, and duly set off early on Saturday armed with my editor’s camera and my own boundless enthusiasm.

Opening up with the blistering Rich, as on both days, a track off the new album that treads familiar lyrical ground about the moral delusions of the feckless “wealth creators” (and hoarders) of modern day rip-off Britain. Dark Days, that first EP instant classic which no doubt cemented in many people’s minds that Fixer Upper wasn’t just a brilliant one off, is in for The Overload. Even the otherwise staid gentlemen in the front row have to move to this one.

Lead single Payday, a song about lettuce, is launched into without the need for any introduction. One of the more unique sounding tracks on the album, it features bongos and some high pitched instrument I have no idea how to describe which in their airiness manage to both sound as caustic as the lyrics. Live there are no such ancillary sounds and the tune is carried by its addictively shoutable hook of ‘take the money and run.’ So addictive, in fact, after me and our Carrie watched the video perhaps a hundred times on NYE we woke up the next day screeching it across the room at each other before breaking into hysterical laughter over and over again. Genuinely precious memories. It’s followed by a delightful anecdote about guitarist Sam being given a set of tickets to a monkey sanctuary by a fan, prompting someone in the crowd to shout “take the monkey and run.” This should be a remix (along with the now inevitable Biggie Smalls mashup) on any future represses. 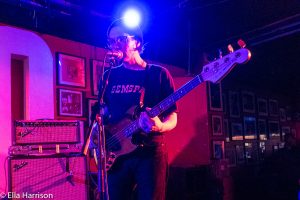 As they open the floor to requests, my yelp for Peanuts (my second favourite song named for the popular salty bar snack after the Frankie Valli & the Four Seasons classic) is politely foregone for material actually on the new album, which is beyond reasonable for a band with such an exciting and fresh piece of work to promote. The excellent Witness (Can I Get A?) is another slice of sing-a-long joy with a deliciously post-punk riff delivered with tractor-beam charisma and a ferocious urgency crammed into its barely over a minute length. Pour Another is a request from the crowd that will hopefully become a live staple. It possesses an irresistible beat that is impossible not to move to, even when you’ve been at another noon gig the day before and your head is dearly paying the price for such an early start.

Land of the Blind has always been their standout live track for me. Carried by a hypnotic rhythm section and delicately sprinkled with twanging guitar, it becomes a febrile behemoth on stage allowing the band to demonstrate their frenetic skill as it breaks down and builds back up after Smith’s vocals are over. For all the talk of Yard Act’s lyrical dexterity, wit and humour, which they undoubtedly have in abundance, it’s worth recognising how solid the band are instrumentally. It’s Land of the Blind that hints at their formidable future as a live act, dispelling any notion that their uniquely listenable sound is at all a novelty borne of the moment spoken-word style has been having recently.

They finish with album closer 100% Endurance. It’s a curious song that opens with the all-too familiar scenario of waking up on a random sofa with little memory of how you got there. It escalates rapidly as the news of extraterrestrial worlds, other species, other civilisations have been found, documented and interviewed. Perhaps by an intergalactic Louis Theroux? Conjecture about a forthcoming Weird Alien Sex Lives documentary aside, I was delighted to hear this live as it’s another album highlight. It reminds me of two of my favourite things- Neil Young’s enigmatic eco-classic After the Gold Rush and Kurt Vonnegut’s ubiquitous Tralfamadorians, an alien race unencumbered by the shackles of linear time. All three use the idea of aliens to explore the duality of hope and destruction as inherent components of the human condition. Smith sings with elegiac conviction and deftness about death, about finding meaning in the universal human spirit and the rest of what he explicitly calls hippy bullshit. “Be kind to each other,” Smith implores the crowd, “you never know what someone went through to become the dickhead they are today.” So it goes. 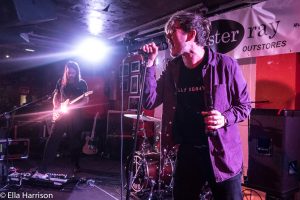 As I write this they are on a push for number one in the album charts. I’m not sure who their closest rivals are, but I’m sure they’re shite and it would be a huge victory for our brilliant grassroots music culture if they made it. These battles are often quixotic but they do stand a chance- so grab a copy of The Overload if you haven’t already. When they signed our records they were disarmingly sweet and genuine. For all the on-stage swagger they always make a point of expressing their gratitude for the support they’ve had, and they deserve every bit of their success. One final point I’d like to make, and it’s important enough that I wanted to save it until the end, is that I’m glad I got to see them two days in a row because after the first show they would surely be a “Yard Act” to follow.