Frenetic energy and wild adventure from the outset. Yet another brilliantly licentious exploration; skyrocketing above and twisting through an imagined City, while never forgetting the endless sewers beneath. The album sings the tale of ‘The Cat In The Hat’; a solitary, troubadour refugee who is falsely incriminated and must solicit the assistance of a motley jumble of rogues and mutineers.

Two icy guitar notes shimmer somewhere in a dark alley. They echo once, before ‘Bad Penny Blue’ erupts and sizzles with bright mischief and impossible optimism. Brisk guitar stabs and drum shuffle accompany the lyrical “subversion and bliss everywhere.” The typical blend of jazz, punk, soul and much more besides set the scene, as the band’s mainstay poet Jack Terricloth trills as the cat and himself at once, “I am the singing automata with bellows in my chest, experiment exploding..a lone aesthetic.” The lead solo is beautifully bluesy and hurtles along this gorgeous knees up. 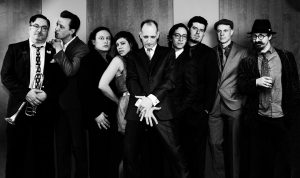 Next up, ‘Citizen Of Jazz’ is a smouldering klezmer and rockabilly fusion piece that sets the scene further for our protagonist, who must grasp for “bravado or bravada…” in a world “always ending..never right..And you always have to fight.” The pathos to the tale carries an earnest sorrow that is never overly maudlin and the spirit of protest weighs the balance of non-pretension and creativity. This is anarchism not as strict political dogma or empty fashion, but rather as authenticity of attitude and pukka expressive imagination.

Perhaps a brief retrospective detour for the uninitiated at this point would be welcome? It should be noted that World/Inferno are a rare example of a truly unique band, or collective as they would prefer. The gang can’t really be situated in any one genre, but play on the punk circuit as nobody else knows where to place them, or more likely many couldn’t handle them. All the more brilliant for us to be blessed to be entertained in this way.

Their first album, or ‘Inferno #4’ (fourth release of new music), ‘The True Story of the Bridgewater Astral League’ was similarly a full musical story. It staged the romance of a young New Jersey gang who stole cars by astral projection. The band performed the bohemian yarn atop a Brooklyn rooftop, with a reportedly suicidal actor portraying the lead part who flings herself off a roof. It is said that bystanders were unsure if the actress would forgo the safety harness and take the plunge for real.

Countless other such stories intermingle with the band’s own outlandish feats, metaphors and consistent musical-melding output; projecting a caterwauling of mystique, danger and excitement. Thus rumour begets rumour, speculation and innuendo abound. It would be fair to say the seemingly endless mythology is in part created by and at least enjoyably encouraged by the troop and appreciation of this may help new comers embrace the mayhem. That being said, to dwell on these aspects would be both an endless and largely fruitless endeavour.

Instead, we return our attention to this ninth and newest album release. The Society, with their rotating membership of at least forty strong, (normally ten or so playing at any one time, gig or recording), offer up another belter with many fascinating musical ingredients and guests. ‘Having A Double Life Is So Hard’ is another untamed smorgasboard of mastery. The excellent detail in the sound and texture interchanges reminds us that while The Society inhabit the punk universe, the caliber of musicianship is of orchestral professionalism. It has to be for what is being attempted here. The song steams through violin-lead gypsy-rock reels, to mournful keys and bass, accented with tumultuous brass and vocal depth. ‘The Cat In The Hat Has The Right To Sing Blues’ defies categorisation once again. Our protagonist seeks sanctuary with welcoming vagabonds, “The feds are after this cat in the hat and he wants to hide in our house..We are gonna help him out cos that is what you do.” Borrowing from funk and discordant bluegrass, the horns provide a sense of listless melancholy, before the joyful chorus careers like a freak circus rallying cry or lunatic ice-cream van theme, (one that has been hijacked by a serial killer perhaps). “Another year for your happy warrior friends, the problem with being a saint is you have to be dead…Never bequeath your claws or your teeth!” 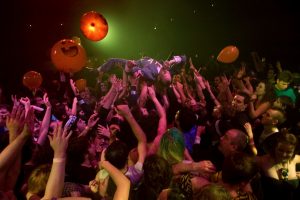 ‘Three Parts WTF’ is a marching-band ska and country blend, tinged with Dixieland jazz overtures. It boasts a mesmerising, trance like and bouncy chorus, “Come to the station, please bring the bail. The cash is you know where…tell them I wasn’t there.” Afterwards, the romantic and bluesy ‘I’ll Be Your Alibi’ croons in it’s deep waters and simmers with breadth of scope. It’s probably the album highlight for me, a kind of lounge-core blend of Cohen and Bowie that is still something all-together quite different. An irresistible vocal melody entombed within acoustic guitar, haunting backing vox and interspersed with economical brass bursts. A genius and moving cacophony which then races into ‘Looks Like Blood,’ a much welcome new-wave punk and swift jazz mixture. Catchy as hell despite us seeing the Cat in the dock, “It sure looks like blood, but it’s probably wine..Order! Mr in the Hat how do you explain away DNA!” A short interlude ‘Briar Patch,’ builds the suspense, “There’s money under the floorboards for bail. If you don’t hear from me then you’ll know I’m I jail.”

There is never any let up in the inventive, quick wit. ‘All I Can Do’ powers on with calypso-shuffle rhythm, bolstered by ska accompaniment and an awesome pop-punk chorus, blasting with desperate urgency, “All I can do to save us from this nightmare, is to make us stay up late.” The penultimate banger, ‘The Roosters Are Coming Home To Crow’ can only be described as a country-pop masterpiece, infectious beyond comparison and another wicked apex. It builds from a mystical, trembling and restrained verse into superbly springy chorus. Rapid, clean guitar spikes and sharp brass section complimenting the smooth vocals in perfect harmony and will have you returning for countless spins. Intelligent, funny and poignant lyrics throughout, “First stop to the culture wars, rushing to inhabit my dreams and fall asleep on the floor. See you on the other side..like a kitten on a rug, used and used to it..practicing lechery with ghosts. We don’t deserve it. At least not more than most.”

Grinding bassline lays the foundation to the dark denouement, ‘Freedom Is A Wilderness Made For You And Me’ which throws brooding and soulful vocals under a distorted metal riff. Violin and brass sections once again add engrossing flourishes to the ambiguous cataclysm, “That any of us are still here it’s a gift…If you were still around this land would belong to you and me. Freedom is a wilderness, patience breeds contempt. I didn’t plan to be around to explain this universe made for you and me…” The layering of the tragic, the hopeful and of acceptance leaves us wandering and wondering as ever.

It sounds peculiar to say, but this album is as expected. In that it’s diverse noises that constantly surprise and intrigue are exactly what we know and love in the approach of previous album triumphs like ‘Red Eyed Soul’ and ‘The Anarchy And The Ecstasy.’ We are used to their carnival rock and ability to effortlessly mix it up. Here we go again, into the unknown.

The mischievous feline grin of Terricloth is matched only by the listeners. If that doesn’t make sense to you, then you simply can’t have had the intoxicating pleasure and I urge you to get involved. After such an exhausting journey this time round, you’d be surprised to note that the album is complete in a mere 29 minutes. These musical and cultural insurgents manage to pack a full symphonic, epic and dark operatic musical into snappy punk format with schizophrenic energy. No unnecessary filler tracks here whatsoever. Ultimately, another enthralling release from these legends. Whether you know them or not, you cannot go wrong. Buy the LP from Jello Biafra’s formidable Alternative Tentacles Records, complete with awesome cinematic-noir style art and that all important poetic lyric sheet. Enjoy.