The second anniversary saw thousands join the Grenfell silent walk. The powerful, dignified, quietly determined procession closed roads in west London before gathering under the Westway, symbolic of a community rebuilt under the road, to hear the reading of the names of the 72 dead; victims of the Grenfell Tower disaster.

We are reminded, two years on, of the families displaced by the fire and still not in permanent housing, of the tens of thousands of people still living in flats clad in flammable materials, of reports from the Metropolitan Police that prosecutions for the deaths of the 72, if they are brought, are still years away.

The Grenfell Tower Inquiry, lead by retired judge Sir Martin Moore-Bick, has picked over the response of the London Fire Brigade on the night of the fire in minute detail but has yet to hear evidence from the designers, manufacturers or testers of the cladding, the contractors, sub-contractors or those who specified and commissioned the refurbishment. The political system that favours marginal gains, a penny pinched here, a labour hour saved there, in the interests of shareholder value, remains outside the scope of the Inquiry.

The Fire Brigades Union’s policy, Grenfell Tower: Never Again calls, amongst other things, for a ban on combustible cladding and the strengthening of tenants rights. It resolves to ensure that the Public Inquiry addresses the concerns of the bereaved, survivors and residents and that the fire becomes a turning point for firefighters and for public safety.

A few months after the fire, I was in this spot under the Westway with Funky Lol from The Protest Family to play a gig celebrating the 15th anniversary of Joe Strummer and Mick Jones reunited on stage at a benefit gig for the FBU, whose members now swell the numbers marching silently in remembrance and for justice every month. Mick headlined the show that night, fronting The Rotten Hill Gang, tearing through a mini Clash set to close the show. Outside, the shadows of the tower and the Westway fell heavily and I can’t help but think that if Joe was still with us he’d be front and centre of this campaign. 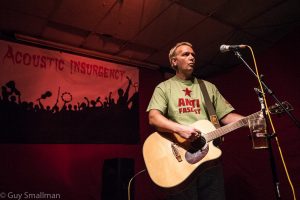 Steve White is a London based FBU activist. His band The Protest Family play regularly around the UK.