Imagine a world governed by true equality. Where everyone was able to flourish regardless of their race, religion, gender or sexual orientation. Such an idea raises many questions.

For me the main one being: What the fuck would The Restarts be doing?

As I can’t really imagine any of them playing in a jazz band; I’ll concentrate on the here and now and the boiling roar of street punk rage that kicks the absolute shit out of everything in their newest and best album to date.

‘PANIC’ kicks the record off like an enormous elbow in the face, as Kieran howls the words of Greta Thunberg’s address to the UN when she called out their inaction over climate change. A fast & frantic hardcore opener, that very much sets the tone for the rest of the LP. Then we crash straight from the political to the personal as ‘LIVING A LIE’ examines the vacuous existence of the unfortunate souls whom are hopelessly addicted to social media. It is three-chord perfection with a tasty little guitar solo and a sing along chorus for us to all to regurgitate to our former comrades who waste away their lives gaming, chatting shit and chasing ‘likes’. 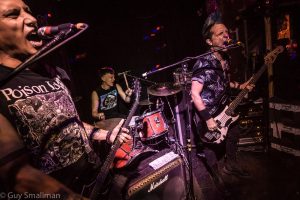 ‘SHUT DOORS’ is the first of many proper reminders that this band do the ska-punk thing far better than many other artists whom actually describe themselves as ska-punk. The lyrics spew a searing indictment against the greed of local councils whose unfair licensing practices, combined with their desire to sell everything of value, are seeing our most cherished venues drop like flies. On a more general theme ‘FIRST WORLD PROBLEMS’ has a go at those annoying bastards who believe that the universe revolves around their personal issues.

‘OUT AND PROUD’ hits a serious change of tempo with some truly apocalyptic bass work from Kieran combined with pounding tribal beats as Jeremy beats his kit into complete submission. On the previous album, ‘UGANDA’ looked at the horrific legislation imposed on LGBT people in East Africa. This tune is kind of an update which lays out the Christian colonial responsibility that the West has for imposing intolerant and bigoted ideology on the people that were conquered and enslaved. This band have always understood their history along with their politics.

‘ONE PERCENT’ which was recently released as a split with the Subhuman’s ‘99%’ is a furious anti austerity anthem with a nice downbeat refrain that chugs away into its climax with another sing along chorus that morphs into a yet another understated guitar solo. Which makes us all glad that Robin stands among those axe-men who properly understand the concept of precision & control over indulgence.

In a year that has seen brilliant releases in support of Palestinian human rights from Lowkey and Active Slaughter, ‘UPRISING’ takes its place in the role of honour and includes some audio from Robins time in occupied Palestine as a human rights observer and activist. We get another taste of his adventures with the intro to ‘DARK DAY IN SEPTEMBER’ which recounts the brutal eviction of the Calais jungle camp by the loathsome CRS riot Police. Both tunes are given extra bite by being written about personal experience. 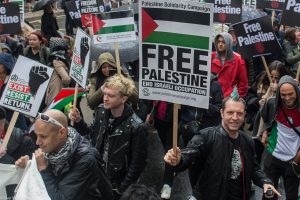 ‘BLACK DOG’ offers up a tuneful reminder that street punks are more than capable of exploring the most difficult subjects with empathy and sensitivity even when they are at their most shouty. So the subject of depression and self loathing which silently blights so many of us gets examined in all its gory detail to remind us that we’re not alone. ‘THE FORK’ also delves into deeply personal experience. This lot have never shied away from baring their souls to make an important point.

‘20 YEARS’ is another tune that makes me feel like there are some joyous melodies trapped somewhere beneath that burning pit of explosive hardcore anger. It is another beautifully crafted ska-punk tune and presently in my top three tracks on this LP. It takes many of us on a welcome trip down memory lane to those carefree days of the nineties and beyond, before meeting the harsh reality of Brexit Britain which we all endure at present. An absolute classic.

Final song ‘NEW WORLD ORDER’ represents the one and only musical departure from their previous releases as it opens with some deliciously sinister keyboard which appears to have been kidnapped from a dystopian sci-fi movie from the early nineteen seventies. It is a doom laden appraisal of our imminent slavery to to a fascist nightmare of own making. Unsurprisingly it is highly reminiscent of the work of Killing Joke with perhaps a bit of Ministry chucked in. It is a dark end to a to a fabulous collection of raging anthems, each of which, stand out on their own merits.

This album represents a step up, both musically and lyrically, from their previous work. The production is nicely polished without losing any of its cutting edge and the tracks encompass a range of issues and emotions that pay homage to the sound that they have developed over 20 years while pushing it yet further. Definitely worth adding to your vinyl or CD collection but obviously written primarily to be experienced live in the ear splitting mayhem of a Restarts gig.