“Whatever you do, don’t use the word ‘blistering’ in the review” was the Migraines one request to me when sending their record “Young, Gifted and Fast” over for review. “We always get described as ‘blistering’…”

Sorry lads, I’ve fallen (twice) at the first hurdle there – contradictory old willy wangler that I am. The remark did reverberate later when I chucked YG&F on the old gramomophone, however, because while it’s true that the Migraines do tend to craft their tunes at speeds that would best suit the fast lane of ein autobahn, the record reveals that this tendency towards extreme velocity can hide a wealth of subtly interesting songwriting tricks. Such a description, therefore, misses the point IMHO.

I’ve been party to the Bristol punkers live shows on many an occasion, and they are such a joyous band to watch, tune after tune flashing past in a whirlwind of furious energy, that much of the depth apparent here isn’t so easily detected. It’s often the case that bands who produce formidable live shows find the recording studio blunts their edge, over-numerous separate takes smoothing off the frenetic energy they create as a unit. Not in this case; Jouko Lavonen’s crisp production keeps the power and aggression of the Migraines’ live experience while revealing the layers beneath.

Such details include the surprisingly melodic touches supplied via Rory’s guitar on “Intro” and opening-track-proper “Shred”. The time changes and lead shredding which are sometimes obscured live are much more obvious here, “Shred” coming across like the unholy bastard son of Dag Nasty and the Stupids with touches of Gwar in the “ooh, aah” breakdown. At 2.59, it’s also the longest song on the record, an approach which chimes nicely with their skate-punk credentials. “Fist Bump” showcases Cabbage’s cheeky lyrical approach within a thrashing attack which reminds me of UK hardcore legends Imbalance; and they get extra points for the stop in “One For The Universe” on which the whole composition pivots perfectly. “Scat Song” again demonstrates their non-serious side, alternating between furious hardcore blasts and the scat jazz (or their version of it) the title suggests. 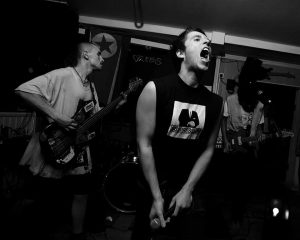 “Sex Offender” almost breaks into a tango before descending into gloriously unfettered noise-punk, then they break into my favourite song of the album, “Chica Senorita”, on which Cabbage baits the punk police with a politically-incorrect smorgasbord of tongue-in-cheek filth. “Transport Pigs” delivers a stream of invective against one of the universal enemies of skint squat punks keen to navigate public transport systems without relieving themselves of monies which could be better spent on cider and dubious narcotics. Finally, album closer “Pussies” marks a turning of their ire onto the scene as a whole, featuring a sweet melodic guitar break worthy of comparison with the best of the UK’s thriving ‘90’s hardcore scene, to which Migraines demonstrate themselves worthy successors.

It may flash past in a shade over 20 minutes but there is more than enough substance to “Young, Gifted and Fast” to make it an essential release for anyone looking for the very best that todays UK punk scene has to offer, as well as a remarkably adept foil to their incendiary live shows. Let’s hope they can get better on album number 2 – they have the chops and the style to do so. In the Migraines’ case, I suspect, even the sky is no limit. –