When I first announced on my band’s Facebook page that I’m reviewing punk & hardcore records, Connor- of The Doinks- got in touch right away. We had an upcoming gig together in their hometown- Falmouth- and I witnessed them playing with the same eager tenacity usually seen in the facial expressions of people getting exorcists from Gospel Churches. For those that don’t know, Falmouth- and Cornwall more generally- has a scene which can boast some pretty good bands (Rash Decision / Monolithian / F. Emasculata / Bobby Funk). There’s also a couple of labels down there like Autonomonster and Dead Invoices Records.

We Play Punk is the first release from The Doinks, four friends and students together who’s humorous, tongue-in-cheek approach to punk-rock lies somewhere between the witty and comical approach of the punk pathetique movement, and that of the simplistic and riffy indie-punk bands that you currently see in magazines like The NME. The EP starts with a skit track, a ‘Hi, nice to meet you’ from the band, where they play one chord for a whole song and chant, “We are the doinks!”. This is followed by Overdraft a song about students doing what they do best: spunking their loan up the wall and begging mum for some cash!

Next up on the EP come’s Should Have Bought A Boat. This first person narrative details the writer being soaked by the Cornish rain over and again. After that it’s NO!, which is the highlight track of the EP in my opinion. The lyrics are funny and melodramatic enough to make even the most miserable of bastards smile; they detail the writer quickly escalating situations that always start in someone taking some perceived liberties with him. Except by the end of the song his girlfriend has just been mugged, and stabbed, in the street and is asking him to take her to hospital- by which point the writer has had enough and simply replies, “YOU CANT TELL ME WHAT THE FUCK TO DO!”. Heavy on the satire and sarcasm, the song comes across as a smear on people who won’t be told what to do, even when what they’re being told is clearly the right thing to do; this becomes gradually more apparent towards the end of the song. 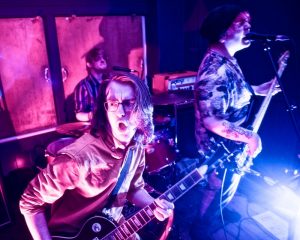 Lazyland is the EP’s token dub track; the tone of the lyrics- which seem to imply that someone’s been smoking too much draw- mimic the laid back music, and I think that this track gave the guitarist a chance to experiment with dynamics that differ to the other 5 tracks. The last track, WD-40, finishes up the release with a story about nearly dying due to your broken bike, and the mechanic shrugging and saying “WD-40, lube it up”.

What you can probably tell if you’ve read this far in, is that the release is pretty lyric-centric. It’s where the majority of the songs “personalities” come from, and in my opinion the writer deserves some kudos for that because keeping people interested is a hard thing to do. They’ve definitely put their all into their first release, the production is tidy and they even went to the lengths of self-releasing it on CD, with everything done entirely D.I.Y, via Rainbow Room Records. Their own label! The more this band delves into “the punk scene” the better they’ll get, because they’ve clearly already got that DIY punk mind-set.