The Annihilated have been making some notable noise recently, grasping the attention of their audiences, and establishing themselves as newfound favourites in the London punk scene. They formed in the summer of 2019 and sport a line-up which includes musicians from Canadian punk bands S.H.I.T (Hardcore/punk) and Lion’s Share (Oi!), as well as a former member of Arms Race (London, hardcore/punk) playing alongside a frontman who’s just joined their first band.

The demo has had a great response online, and the band managed to land themselves a slot at Static Shock Weekend (2020) in London. Simply and aptly titled, Demo, it’s one of the few good things that 2020 has brought us on top of the all-enveloping disease and political turmoil we’ve been lumped with.

It all begins with a punchy banger called Never, at 46 seconds it’s a short ‘n’ sharp hardcore explosion warning the listeners of, “…understand[ing] the consequences/ Of giving the smallest ground to the fascists”. Their blend of hardcore emphasises thumping ‘1-2’ punk beats and guitar parts trimmed down to their basics, alongside a consistent and driving bassist. It’s lean, simplistic, and powerful, and the lyrics follow suit with only 3-5 short verses per song. In the following track, Push Me Around/Abuse of Power – which, for me, was a real high point in the EP- the writer owns this classic punk rock style with repeated shouts of, “All you do is push me around!”, amongst short verses drawing from personal experience. Push Me Around runs straight into Abuse of Power, which keeps up the simplistic punk rock lyrical approach, this time talking about, “Another youth deceased, /Shot by the Police”. 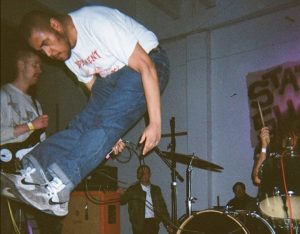 Killing Me showcases the band trying out a different approach, with sinister and discordant guitar progressions played to walking-speed drums and dark introspective lyrics; it’s pretty ominous whilst maintaining all the aggression typically found in The Annihilated’s sound. The EP is rounded off with Body Count which gives the listener about one more minute to furiously tap out the drum beat on their lap before the whole thing’s over.
After I first heard the EP I spoke with frontman, Bobby, about the fact that that he’d just had a run of tapes done- sadly I missed my opportunity to nab one from the first run!-, he went on to say that the first lot would be followed by runs in Ukraine and Indonesia. I remember feeling a genuine respect for his tenacity, straight from the get go with no time to fuck about- it’s this tenacity that fuels you in DIY punk and hardcore music; and when I first heard the EP at a friend’s house, it was this same ‘no fuckin’ about tenacity’, now manifested in their music, that violently commandeered my brain and made me realise that these lot have genuinely put out a great piece of aural battery.

Not even “great aural battery” is entirely invulnerable though. Whilst the whole EP is enjoyably simplistic the decision to not write any lead guitar lines does give it a lack of texture overall; as well as this, I hope that in the next release the ideas discussed in the lyrics can encompass some less tried and tested issues. But when this EP comes to mind, I don’t think about that shit. I think about the killer sense of urgency you get when you hear those chords punching away at your ear drums, and lyrics that come straight from the heart being yelled straight into your ear. That’s how a good hardcore punk band is supposed to make you feel.