Somos Guerreras are Rebeca Lane, Audry Funk and Nakury MC. For several years they have been redefining rap music and taking it to audiences around their native Central America and now further afield with a European tour. They carry a strong, uncompromising feminist and political message. They also organise workshops for womens organisations and community groups as part of their touring plan. We caught up with them at their London date:

What kind of reaction they were getting here compared to places that you play more regularly?

Audry Funk: We have been very welcome everywhere, people have been very receptive. For us it is very important to have people attending our gigs, listening and emphasising with the message we bring. The reaction has been positive and loving, I have no complaints for any of the gigs. Everyone has been so respectful. We have been performing a lot in Germany and we were warned Germans do not dance much but they did when we performed there. People come to see us and give us hugs after our gigs. In Mexico and Central America we have always had a similar experience, lots of love and respect and empathy from the girls that come to see us (yes, they are mostly females). Inspiration works both ways, we inspire them, they inspire us… It’s very nice, love is global.

Rebeca Lane: What it is really different is that in Central America we don’t have all the infrastructure that you have here, the culture networks, the venues, the spaces to perform. In Mexico there is much more opportunities than in Central America, but there’s aren’t really spaces where to become a professional in the music field. With such difficult conditions, it is very complex for someone to dedicate exclusively to a music related project. I think that being in Europe is an opportunity for us. It helps us massively towards becoming a professional musician with dignified income. Also in Europe the treatment received, the spaces, the sound equipment, those working in the music industry are very professional. 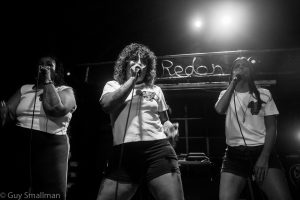 Your band is well known for its political stances and support from groups like Astraea (Lesbian Foundation for Justice). Are you working with any specific community or political groups on this tour?

Audry Funk: We received funding from Astraea in 2016, yes, but we aren’t linked to any organisation. Generally, it’s organisations that get in touch with us and organise our performances, but we aren’t directly linked to them. We are autonomous, self-managed, independent and rely on the strength of our work.

Who are your influences (musical or political) and how have they shaped your music?

Nakury MC: Each of us has different musical influences as we all come from different contexts. Whilst we come from Central America, I’m from Costa Rica, Rebeca is from Guatemala and Audry is from Mexico. So we have a lot in common. In my case my influences come mainly from afro-Caribbean music, reggae, and indigenous music from the land where I live. Of course I am influenced by rappers and especially women that have strongly influenced my way of writing and even the way I express myself on the stage, not only with words.

Nakury: Yes, although it is difficult to specify as I like all types of music…. within the rap scene I like very much the work of Lauryn Hill, Queen Latifah, some stuff from Roxanne Roxanne, MC Lyte, Rapsody… all of whom belong to the Latino-American rap scene. I also like very much Ana Tijoux, Arianna Puello, Alika (although she perhaps makes more reggae than rap). I also have influences from the Latin American ‘Nueva Canción’ movement such as the Chilean Violeta Parra and the Costa Rican Guadalupe Urbin The music that perhaps influences me the most is that of women, women of colour, the music of resistance.

Audry Funk: Same here. I have practically the same influences… I also like Violeta Parra, Nina Simone, Lauryn Hill, even Lily Allen (although she makes pop music). Although I occasionally listen to music made by men, I am tired of the same slugish patterns, so my playlists are made mostly from music made by women. I would say that as a political stance I no longer listen to music made by men. Their narrative is very repetitive. I give more chances to the girls, listening to their work, recommending them, as the internet helps us develop networks. 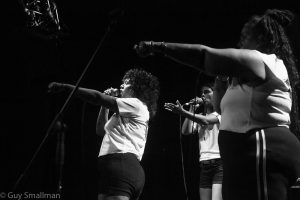 What has drawn you into hip hop? It seems to be a music scene often dominated by sexism. Perhaps more than we are used to on the punk scene?

Audry Funk: Do you think there’s no sexism in punk?

Of course, there is.

Audry Funk: Everything in this world is made for men, full stop. If we do not take the spaces then we are out. So, we chose rap because it’s our passion.

Nakury MC: Also, women have been very present from day one in the hip hop movement, but we have been made invisible. For instance: in the Bronx peace processes in 1971 the group that fomented the peace signing were the Ghetto Brothers and the Ghetto Sisters, but people only talk about the Ghetto Brothers and they don’t mention that it was the only gang with women within its members. This is not a coincidence. It’s not a coincidence that the first organiser of a hip hop party, Cindy Campbell, was a break dancer and graffiti artist. But nobody remembers her unlike her brother DJ Kool Herc. Women have always been here, for us it’s important to give visibility to the work that women have already done for the movement. For instance, if it wasn’t for Marta Cooper, a photographer who documented the beginnings of hip hop, we would not have today those pictures that tell the story of the history of the movement. Many times they want us to replicate the narrative of men in hip hop, and we are doing it our way and from another perspective, and it’s valuable to convey the voice of what we are doing, by working together and supporting each other. Totally, our job is to break those prejudices.

Aside of your music, how do your workshops work and how successful are they are at empowering people? How do you advertise them? How do you reach out?

Rebeca Lane: This depends on the local groups that organise and promote the events. We get approached by schools, for example, that invite us to workshops. So yeah, it depends very much on the people that commit locally. Sometimes we get invited to perform in places such as Perú, but we can’t just jump on a plane and go. We really depend on local organisers. This is interesting because the work that we do is not isolated work, but it’s work that supports the processes already in place. It’s not like people are not empowered until we do our stuff, they already have their own processes and we come to support them with what we are good at.

Linked to what we asked previously, what type of local organisations you have worked with? Did Movimientos bring you to the UK?

Audry Funk: Generally we work with migrants, feminist collectives, anarchists… we try to work with them and they do invite us.

Nakury MC: In the UK there’s Movimientos and FLAWA, the latter organise an annual festival of Latin American women. They are Teresa (FLAWA) and Carl (Movimientos), whose main aim is to bring projects from Latin America to the UK for as long as there’s a social vision and there are projects that contribute to social change. For us it’s a pleasure to be here and to make contact with people in so many countries that want to offer spaces and dignify all the work that comes from Latin America.