One of the many bands that blew us away at this year’s Rebellion Festival was Shöck who have built up a loyal live following in Spain and have now embarked on their first European Tour. They are a classic four piece rock line up with Micky (vocals), Nando (Guitar), Vixto (Bass) and Ricky (Drums). They play a furious hybrid of melodious punk and went down an absolute storm on the Rebellion Introducing Stage. We caught up with them in the doorway of a nearby charity shop the day after their epic gig:

How was your first trip to Rebellion, how has your experience been?

V: Some of us had previously been to Rebellion as spectators. This is the first time we come here as musicians and of course, it’s a massive experience… being able to see the bands we grew up with which we had as musical references, and on the top of that, being able to participate and be part of it… We were under the impression the festival wasn’t much DIY, but we have realised that this is not the case at all. It’s a proper punk festival… When we received the requirements sheet they told us that if we had ever been part of a far-right group they didn’t want us there… Also, we are vegan and vegetarian and we were gratefully surprised with the festival menus. A massive, massive experience. 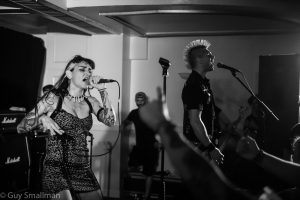 So what’s the punk scene like where you are from and how does it compare with the scene you have seen in the UK?

V: We are based in Bilbao and there’s a bit of everything… Whether in the Basque Country or the Spanish Estate, the punk scene has many ‘faces’, from the most commercial to the most underground. I guess it’s the same in the UK, but we cannot comment as we do not know the scene here much. Of course, bands that for us are massive back home perhaps are not that supported in the UK or are just ‘ok’. We chose to play in the least commercial events… We sometimes play in festivals or gigs along with some ‘off-the-ghetto’ bands, but we usually play in squats, benefit gigs and so on…

As far as your music is concerned, which bands influence or have influenced you?

V: We all come from different places (Catalonia, Basque Country, Italy…) and so each of us have our own influences.

V: Iberian punk from the 80s, not only from the Basque Country but from Madrid and Barcelona. Those are our main influences, but we try to make punk music that is less rude, less harsh, less noisy, and more melodic… We have breast-fed from Iberian punk so much that we sometimes sound more abrupt.

M: Yes, it’s abrupt but my voice brings a smooth and clean touch…

V: That’s right, although our influences are mainly bands like MCD, Commando 9mm, RIP and others, she brings a taming filter which softens down our music.

We understand that Micky sings in other musical styles?

M: Indeed. I also sing Rhythm and Blues and Rockabilly in a parallel project, but I have always done punk. 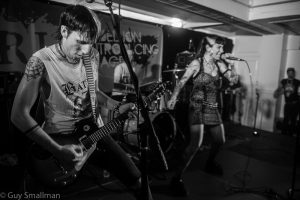 What are your songs about? What topics do you cover?

V: Because of the way we understand punk we cannot sing about meaningless topics. From the basis that punk should be anti-establishment and combative, we feel obliged to always reflect some sort of protest in our lyrics. There’s something we all have in common: we are anarchists, anti-militarists and anti-specists, and that’s what we base our lyrics on. Sometimes we sing about broad topics such as anti-militarism and anti-specism, and sometimes we sing about issues from very specific geographical locations. For instance, ‘Devadasi’ is about the situation of Indian girls forced into prostitution in temples. The lyrics in ‘Subsuelo’ are about kids living in the sewer system in the Mongolian capital.

Is there anything you would like to add? Any planned gigs?

V: We are touring around Europe. We come back to Berlin next week and then we continue around Germany.

M: One thing I wanted to add is that we weren’t expecting such a warm welcome in the UK, it has been beautiful.

V: Especially since we do not speak or sing in English…

M: And we know how important it is to sing in English here… hopefully we can get away with it and keep singing in Castilian.

We do hope to see you next year on one of the bigger stages… Where can we find you in the meantime?