At the start of last week, I bumped into Sean Taylor outside the Home Office at the Extinction Rebellion mobilisation that blockaded roads around parliament. A few days later, I saw him again in Camden, this time at his sold out gig that is soon to be put out as a live album.

As the North London singer songwriter told the audience between songs, his life as a musician involves almost constant touring around Europe, often with a full band. At Glastonbury alone, he’s appeared on the cavernous Acoustic, Leftfield and Rum Shack stages. The decision to record a live album without backing musicians, in such an intimate venue as the Green Note, therefore seemed both exposed and brave. But on stage with just one guitar and his trademark fedora hat, he dipped into his 15 year back catalogue to deliver 90 minutes of stripped naked Americana, slipping between blues, folk, jazz and indie before getting the bus back to his home.

Taylor grew up in London and by 16 years old he was already going to all night warehouse parties; some of his best songs are bittersweet homages to London’s rave and drink culture. Drug references pepper the night’s chillout opening number Heaven and return again in the effortlessly rhythmical So Fine, one of the highlights of the night.

In an era of pre-packaged pop The only good addiction is love, and Calcutta Grove, both title tracks from early albums, Path out of the blue, a song about mental health and even his complete reworking of the Elvis hit Heartbreak Hotel all display a sombre adult intelligence that isn’t to everybody’s liking. 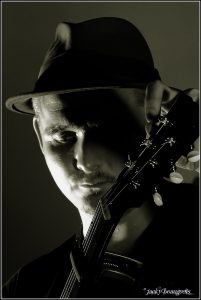 In contrast, Taylor’s musical artistry is continually highlighted by music critics, including the likes of Bob Harris & Huey Morgan on radio, drawing comparisons to John Martyn, Neil Young and Tom Waits. But as well as being a guitar virtuoso, Sean Taylor is a deeply political artist. Having appeared on stages for Love Music Hate Racism and the People’s Assembly, as well as releasing tracks for the Hillsborough campaign and blacklisted union members in the construction industry, his songs are chock full of social commentary.

Perhaps no more poignantly than on Grenfell, the stand out track of his latest album. Taylor’s Kilburn home is only a few miles from the site of the tragedy and when you hear the hook line ‘the working class get zero hours and place to sleep in Grenfell Towers’ sung over his haunting cascading blues guitar; its pretty clear where he stands on the issue.

But this was only one of many political tracks in the set. Little Donny is an angry side swipe at Trump. While This is England delivers an equally incensed spoken word state of the nation review of Brexit Britain, a track which Taylor tells the crowd gets a ‘different reaction depending on where in the country I’m playing’. The high point of the show was the more up tempo Stand Up, an anthem against austerity written at the time of the Occupy movement, and dedicated to Extinction Rebellion, where we met earlier in the week.

Occasionally Taylor’s lyrics can seem a bit forced but those rare transgressions can be easily forgiven whenever his guitar and conscious lyrics come together to produce sublime works of art that cry out to be remixed. When I hear music fans moaning that no one writes protest songs anymore, it always makes me wonder what on earth they’re listening to.

With thanks to Nick Barber @efsb and Jacky Beaugeois for the images,