Hands up who remembers Brexit? It was that pre-pandemic thing that dominated the headlines after one strain of nationalistic capitalist dog shit managed to usurp a larger strain of neoliberal capitalist dog shit. Using a fair bit of racism and disinformation to con several million people. The consequences for touring bands look pretty dire as we’ve reported before.

So Kent grime-punks Riskee and the Ridicule have delivered a new song which casts it’s critical eye over one of the more idiotic propaganda tools employed by Farage & co during the referendum. The utterly inconsequential blue passport sleeves which we’re told are being made in Poland. 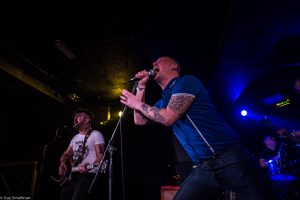 Referring to the constraints that leaving the EU poses, ‘Blue Jacket’ pokes fun at the ‘Brexit means Brexit at any cost’ ethos. It’s humorous, lyrically dark, yet musically happy. That offset makes for a stark contrast between the disappointment and anger in the words and the optimism in the music.

“We hate Brexit,” states frontman Scott Picking. “Musically It’s most likely going to cripple UK DIY touring bands on the mainland. Not only that, but with the way the world is so affected right now by COVID-19, we need unity more than ever. Nobody had a clue what they were voting for and people are still none the wiser and all divided.”

The song itself is very much the winning combination of big chorus, tuneful guitars, clever lyrics and furious rapping that the band have used to cement their live reputation. Scotts withering commentary cherry picks everything from Coronavirus to Chlorinated chicken as he spits rage at so many attitudes born from ignorance and English delusions of grandeur. Can’t wait for the next album.