As the never ending plague seems to be evolving into something a bit more manageable (no chickens being counted) it looks like Rebellion Festival will finally be back in its original form after a hastily organised and highly successful one day taster last year. However not wanting to stand still the festival is adding a new and frankly quite exciting  string to its bow with the addition of an outside stage in a pretty damn iconic location.

R-fest will be a stand alone event with tickets available at £50 per day or free entry to ticket holders of the main Rebellion festival. While it features many acts who would not look out of place at Rebellion like The Skids, Millie Manders and the Buzzcocks it will also feature a range of artists who cater more for that festival vibe and the eclectic tastes of the regular crowd. Big names like Gary Numan, The Levellers and Squeeze will be gambling with the elements alongside some of our personal favourites like Ferocious Dog. 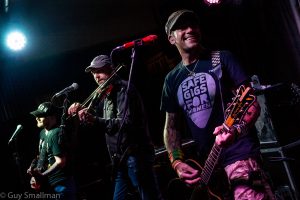 Billy Bragg has now been announced for the final day. Here is the full line up which quite frankly stands alongside many of the festivals announced for this summer thus far:

FRIDAY 5th AUGUST: The Stranglers, The Undertones, The Skids, From the Jam, Toyah, Jilted John, The Vapors