There’s a comforting familiarity that exudes from every track on this ten inch. This lot have been battering our eardrums with these numbers for just over twenty years in pubs, venues and squats around the circuit. Now finally we can listen to their raging tunes recorded to a better quality than on someone’s mobile phone at the Devonshire via YouTube.

The record kicks off with ‘Rape Is Rape, Even If The Rapist Is In A Band That You Like’, a mixture of doom-laden fuzz-bass and upbeat shouty garage punk that calls out the sexism that still lurks within the scene. They make the obvious point that raging against those cops & judges rings pretty hollow if you’re not prepared to clean up the oppressive dog shit that the patriarchy leaves on your own doorstep.

‘On yer bike’ is an equally furious diatribe against the legion of dickheads that populate our roads and feel the need to abuse cyclists, particularly if they’re women. Lorna’s bass riff reminds me of Sonic Youth’s more tuneful moments before launching the song into more-anarcho speed-garage that helpfully delivers a little selection of retorts to keep handy for those moments when you just need that perfect one-liner to deliver to that obnoxious moron in the van or designer lycra. The punk Highway Code is born!

Concluding side one is ‘Madhouse’ a song that explores that moment when its time to leave the messiest of parties and head out into the cold night air. It has epic riffs and rolling drums spliced with insanely fast guitars from Laura. Its like Black Sabbath getting a well deserved kicking from The Slits. 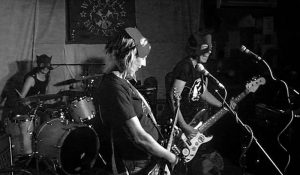 Side two is a sunnier affair that celebrates those all-important ethics of living every punk second while getting thoroughly stewed in the process.

‘Party’ is a gloriously trashy trawl through the greatest excesses of the DIY scene sung from lived experience. ‘La La La’ is joyous in its singalong simplicity. Finally ‘I Fought The Floor And The Floor Won’ is my personal favourite. Swampy guitars meld with a thumping laid-back beat from Tabi. The vibe is like that of The Cramps during their ‘Psychedelic jungle’ period and the words are howled at peak intensity until the song explodes into its banging finale.

A fabulous debut from a band who’ve taken a very long time to produce a record. But its worth the wait and they’ve done it the old school way with a limited number (300) of white vinyls. With postcards, stickers and a nicely designed, full colour zine containing the lyrics and lots of other cool stuff. We’re seriously hoping that we’ll be measuring the time before their next release in years rather than decades. Get this one HERE