The ways in which we hope or plan to escape are many.

The Abrahamic faiths speak of the soul departing the body, and with it the corporeal wants and the social tensions that govern our life on earth.

In the songs of the recently departed Meat Loaf, as in much 20th century American cultural output, it was the motorbike that symbolised the possibility of heading off and starting anew in different circumstances, under your own steam.

In other belief systems, it is within the worldly cycle of life that we might hope or expect to be reborn.

It’s our dreams of departure that form the bedrock of Never Let me Go. Early in the album, Forever Chemical and Happy Birthday In The Sky touch on narcotically-powered efforts at escape. That theme will be familiar to longstanding Placebo fans. So too will be the sound. The ambience of these songs is more akin to Meds than it is to their more recent record Loud Like Love.

At the same time, the space that their last album opened up for careful, lyrically driven songcraft is utilised to great effect in Never Let me Go. The stand out track of the album is The Prodigal. It’s inspired partly by the biblical Parable of the Prodigal Son: a redemption tale about a young man who departs the family home, and squanders his prematurely obtained inheritance, but whose utter defeat out in the world is also his salvation, and the basis of his counterintuitively joyous return to the family home.

The track represents very movingly some of the themes of the story, and its paradoxes and emotional twists. What is particularly beautiful is it’s hat tip to David Bowie. In the middle, it quotes the melody of Under Pressure, specifically its final climactic part that cries out for social and spiritual regeneration, amidst the rough first years of Thatcherism.

Dreams of departure are usually driven by dissatisfaction with what is around us. And the world represented in Never Let Me Go is not a happy one. Surrounded by Spies has a dissonant, cybernetic sound. It addresses the decentralised panopticon that has been erected around us by the social media megaplatforms: a world in which we’re all a bit scared of appearing on a viral TikTok via someone’s door cam.

Try Better Next Time tells of a human race bent on destroying itself and its planet. The proposed solution, that we grow fins and return to the ocean, is not something that I’d wager my fortune on.

But that, in a sense, is the point. Our various departure plans are often filled out by myth, or shaped by our neuroses. And they generally don’t come to fruition for good as well as bad reasons. Even in the most disagreeable circumstances we build important, joyful bonds with those around us. And that perhaps is why this album – one of Placebo’s most thoughtful and musically accomplished – is entitled Never Let me Go. 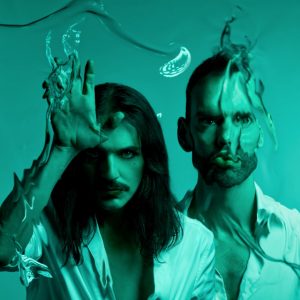