Reading Festival 1991 and dreadlocked, twenty-year-old me was wandering around the arena in my regulation para boots with a smuggled in can of Tenants Super. If you’d told me that a band with no live instruments aside from the drums was going to leave more of an impression that the rest of the line-up combined I’d have laughed in your face. But then immediately eaten my words on getting blown away by the absolute power of Nitzer Ebb who rewired my musical senses in around 30 minutes. Introducing me to a whole new world of tinnitus inducing genius like Nine Inch Nails, Front 242 & Ministry. Also to the idea that haircuts weren’t such a bad thing after all.

So it is with some trepidation that nearly 30 years since I last saw them, I find myself praying that they’re not just going to be another dreadful parody of their former selves as so many of our reformed heroes of old. My fears are unfounded. The one thing that these Essex lads always delivered on was an astonishing live sound and tonight the rig in this slightly posh and unusual venue has been fine-tuned to perfection.

Back in the day they literally took a studio’s worth of gear on the road. But technology has prevailed, and the setup is compact and contemporary to the point of Bon’s once enormous drum kit being slimmed to a set of digital pressure points being struck with the same pinpoint precision. This is why so many roadies are now on universal credit. 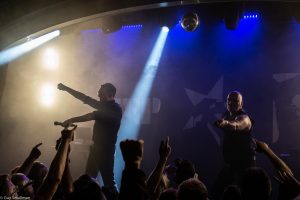 Douglas struts onstage suited & booted like he owns the fucking place and for the next 90 minutes or so, he absolutely does. Looking and sounding pretty damn amazing for a dude in his mid 50s. His voice was always the lynchpin of this band that brought a guttural passion to the mechanical rhythms that pounded our eardrums. A potent mixture of power chants and the angst of a thousand tormented souls.

After warming us up with some choice cuts from 1989’s BELIEF album they lift the tempo, and also the roof, with ‘Getting closer’ and the deliciously sinister ‘Lightning man’ from SHOW TIME. While their music ,which spans 30 years of studio releases, sticks to a fairly rigid and highly addictive formula the show never gets tired or feels repetitive. There is something about the sheer hypnosis of their combination of synth bass and overpowering beats that makes each song seem a little too short, as time itself get sucked into a loop of austere digital perfection.

The lyrical themes that run alongside create a doom-laden vision of great power, crushing submission and a vast machine that will keep its wheels turning at all costs. Doug’s perspective seems to endlessly shift between the howl of the indignant servant to the calculating sadism of the all-powerful slave master. It is a relentless tirade of tortured masculinity. The message is ‘Join the chant’ or pay the price motherfucker. 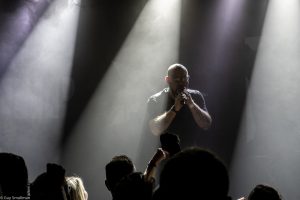 ‘Come alive’ offers a gentler pace and a timely reminder that this lot can be almost orchestral in their compositions when they put their minds to it. While ‘Ascend’ from EBBHEAD (arguably their most commercial release) shows that they can punch out a pop tune that rivals the sheer accessibility of their long term touring buddies Depeche Mode. If I have a single complaint tonight, it is that we don’t get the other two singles from that era. ‘I give to you’ and the powerhouse of metal-fusion that is ‘Godhead’ must surely be back in the show at some point?

‘Let your body learn’ is the fitting finale to the set before an encore that sees the vocals split evenly between Doug and his techno-baldie companions for ‘Violent playground’, ‘Alarm and ‘Cherry blossom’. I’m left hoping that those dates with Nine Inch Nails and others later this year might just spawn a fit of creativity that crystallises into some new material? The mesmerised crowd in here tonight and their vast audience across the channel certainly hope so.