Not content with bring us the stunning debut record that was ROACH in 2017 the cocky Mancunian upstarts are bringing out a new album and have given us a taster with this new song and accompanying promo:

On the new Album:

Aerial Salad have delivered nine songs of anthemic, driving punk rock that roars with disgust, yet equally joy, at the world around them. Released this coming March 27th via the bands own Roach Industries, and once again with the help of Plasterer, ‘Dirt Mall’ is the sound of the once rag-tag teenagers finding their sound, feet and minds, frustrated by day jobs, brexshit and the world swirling around them.

“It captures everything I’ve seen working as a temp in offices and generally being in my twenties trying to work myself and the world out. With some pop songs thrown in for fun,” admits Jamie, and it is all of that and more. Bristling with energy and passion, each and every song means something. From the charging title track (“people should not have to try and survive life,”), the bass and drum groove and explosive chorus of ‘Such A Pity’ (“about being young and a fucking arsehole,”), the cathartic strut of ‘Stressed’ (“the Tories are basically trying to kill us, that’s the cut and dry,”) and first single ‘Romance?’ (“a song about wanting romance with someone who is otherwise romantically engaged,”), ‘Dirt Mall’ is an album by three best mates, experiencing this life together, and taking it on.

Catch Aerial Salad live on tour in the UK this April with Californian punks Decent Criminal at the following dates: 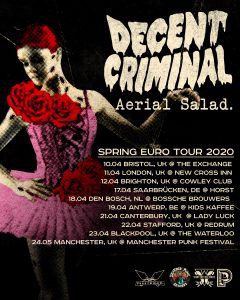