There aren’t many good things that have come out of the ongoing pandemic. Some of us got involved in mutual aid projects that restored a bit of faith in our species. Many of us had our awareness raised about the importance of the NHS and what utter morons anti-vaxxers are. Most of us sat around getting twatted as the supermarkets managed to keep the booze flowing while toilet rolls became a new commodity.

The only utterly brilliant thing that emerged from the never ending plague was Music In Our Underpants. A truly life affirming project created by Kieran from The Restarts and Colin from JUHA. Each week for literally all of the first lockdown they turned their cabin fever into one of some of the funniest bits of satire & parody that we’ve ever seen. Lampooning their favourite artists and often modifying the songs to offer a thoughtful and slightly subversive take on living through the virus. 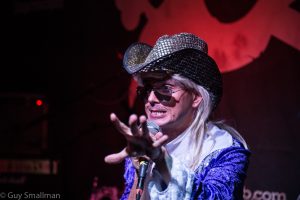 As the weeks turned into months, the whole project became more sophisticated, with groovy computer graphics and backdrops generated by a green screen. Every seven days we had something to look forward to as a new track dropped onto our social media and helped us all retain a little bit of sanity in those dreary times. They also raised a shit load of cash for some worthy causes in the process.

But can they pull this off live. Without those special effects and the detachment of Youtube? Damn right they can!

As Nestival draws to a close the pub is looking decidedly full as the dynamic due take to the stage. The backing track and Keiron’s ukulele are fired up and we’re hurtling straight into a set of hilarious covers. This proves to be an even more entertaining experience than its online form because the pair of them are genuinely the most almighty exhibitionists who could not be more suited to the cabaret spotlight. 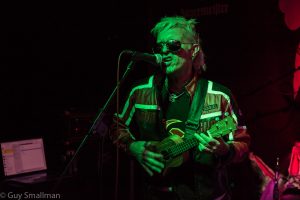 Their seditious versions of so many iconic numbers are even better live than they were on our laptop screens and we get the added bonus of numerous costume changes and a fair compliment of filthy humour. What is equally impressive is how utterly slick and polished this show is. Their first ever live outing.

I absolutely love their cover of ‘Ghost Town’ by The Specials, which is skanked up to a hundred miles an hour and gets pretty much the entire pub dancing. It feels just a relevant now as it did when they offered a commentary on the isolation that we all experienced in the darkest moments of 2020. Their high-energy ska version of ‘Lean on me’ is another gem that gets the place jumping.

There are quite of few moments of inspiration that don’t get played tonight like versions of ‘Cars’ and ‘Sweet Dreams’. Kind of hoping to see them aired one day? 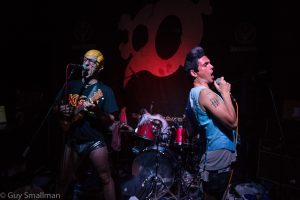 What separates them from other great pastiches of cliches is that they appear to have accidentally created their own sound. Whether it is their version of ‘Beautiful World’ by Devo or Restarts tune ‘Outsider’ the noise is unmistakably that of Music In Our Underpants. Which contains two unique voices, multiple characters and a show that is even more camp than that Flash Gordon movie that came out in 1980.