Released in April originally to coincide with their now postponed 2020 world tour, Bad Accent Anthems is the second full-length album by the inimitable Moscow Death Brigade. Building on 2018’s excellent Boltcutter, their signature blend of hip-hop, hardcore punk and energetic electronic beats has been refined even further. They haven’t kept us waiting too long for more material and you can tell they’ve been busy in the intervening period, with extensive touring under their belts and a razor-sharp focus on the causes of (and solutions to) the world’s ever multiplying problems.

The look is active service-casual. Ski-mask and tracksuit is the motto (not just a list of demands on my Tinder profile) and click clack is the mantra. The genius album title is a wickedly funny statement of intent from the very off- a universal message of human cooperation smashing across cultural, linguistic and musical borders. The irony of the title lies in their exceptional talent as lyricists; crafting fun, witty songs that are deeply and unflinchingly antifascist without ever having to resort to cliché. In an age where every band wants to be punk and ‘timely’ they are the real deal. No opportunistically trite politics dressed up as unthreatening peace, love and beardy-wellness from these certified bad boys. 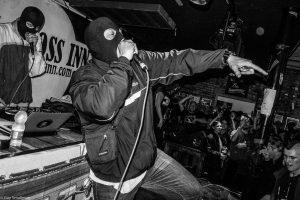 Bad Accent Anthems is lean at thirty five minutes, and it is testament to their creativity that every song is distinct yet the album flows effortlessly from start to finish. Proving yet again that this great bunch of lads from the mean streets of Moscow are all killer and absolutely no filler.

Kicking off with instant classic ‘Out the Basement’ the album starts as it means to go on with frenetic urgency and intensity. Recounting their DIY beginnings, it documents how far they’ve come from struggling for the love of their music, to circle pit hip-hop bringing together an ‘army of millions’ standing together in the name of unity itself. Bad Accent is a tune for the outsiders- the ‘global dialect of renegades’ all the while referencing Lucy Lawless, rebel gypsies, reptilians, aliens and vagabonds. It truly is fun for all the family!

The standout track has to be ‘Whack-a-Mole’ for me, a two minute and forty four second fuck you to every freak who spreads hate online and violence on the streets. Succinctly put as ‘another bigot- we don’t need your opinions on political theory, immigrants and women.’ Dealing with xenophobes, informers and demagogues by any means necessary- and what better means than a great big mallet? Following straight on is Shy Kidz 2020, perhaps the most powerful song on the album. The song is a homage to the very opposite of the cowardly hatemongers targeted on Whack-a-Mole: the quiet youth who believe in a better world- ‘mask on the face, bad seeds doing good deeds… blocking the parades of hate from the streets.’ ‘Never Walk Alone’ is the perfect euro-banger to end on, a quintessential example of their blending of genres into solidarity anthems. A reptilian middle finger held up to the law, fascists, haters and anyone else foolish enough to doubt their Luna-bound trajectory. 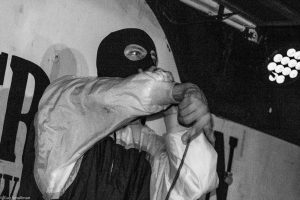 Bad Accent Anthems at times plays out like a fantasy setlist, an unrelenting stream of brilliant tracks that are so intense if you close your eyes you can almost feel yourself being soaked in warm Heineken and body slammed into a speaker. It lives up to the word ‘anthem’ too in its promise of crowd pleasing shout-a-alongs across the record. Of all the albums I have heard this year it is the one that makes me miss live music the most, and makes me most excited about its eventual return. MDB were one of the standout acts at Boomtown last year, and given scheduling and stage confusion just before their show they certainly made the running around more than worth the effort. It was one of those festival-defining shows that sends you away with a buzz that is hard to replicate or describe. I was looking forward to seeing them twice this year, in London at the New Cross Inn and then at Roskilde Festival in June. The London show has been rescheduled for December so hopefully Boris’ second wave and the superspreaders who seem to populate my local bus network don’t ruin it for everyone. I can but pray that they will remain on the bill for next year’s Roskilde Festival, they were top of my list and there is no doubt in my mind it would be an unforgettable show.

As a follow up to Boltcutter, Bad Accent Anthems does not disappoint. The album is stuffed full of insanely catchy beats that promise to send crowds into frenzied, well-meaning violence and the kinds of lyrical one-liners that stand up to anything the Beastie Boys conjured up in their prime. The songs are anthemic tributes to do-it-yourself music, do-it-together politics and do-one diatribes against those who would seek to divide us against each other for profit and power. 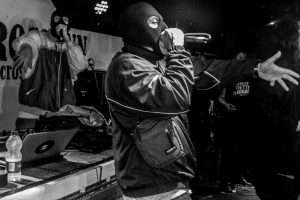 MDB are clearly talented musicians with electric charisma on stage and this comes through in their recorded material. It is not a given nor any easy feat to translate raw live energy into such consistent quality, especially without becoming repetitive. This is where MDB’s longevity will lie. Lesser talented, if more commercial, groups would struggle to maintain such a distinctive attitude and identity without the concerted efforts of record label marketing guys being paid small fortunes for their efforts. In an age of overpromotion the anonymity is not just refreshing, but also a reminder that in countries like Russia state repression and surveillance are very real threats. Their antifascism is, as true antifascism always is, a lifelong commitment that often demands personal sacrifices- especially in places where the state sees political freedom as an obstacle to power and neo-Nazis stalk the streets with confidence. MDB combine this urgent authenticity with exceptional songcraft, playful seriousness and performances that are anything but performative- making them so close to breaking out the basement and on the cusp of world recognition. More power to the Shy Kidz in 2020 and beyond.