On June 2nd the Sunday Times ran an exclusive ‘investigation’ that was utterly absurd, even by the very low standards of its owner Rupert Murdoch. The thrust of their ‘expose’ was that since a speech by Jeremy Corbyn at Glastonbury festival in 2016 it was now infested with hate speech – even to the extent that it was booking acts that openly call for the murder of tory politicians, and those who vote for them. Their evidence? A single tweet by Peckham band Fat White Family and a video by obscure techno-punk act Killdren. The video in question, with its comedy violence, was no more an incitement to harm anyone than an episode of Tom & Jerry would be to chuck your neighbour’s cat under a steamroller. Not least, because it contained a huge disclaimer at the end. A disclaimer, that the Sunday Times, and every other news outlet who recycled the story, appeared unable to see.

Within the first few hours of increasingly idiotic media hysteria, the owners of the stage the Killdren had been booked to play on released an utterly pitiful statement and uninvited them. Never trust a hippy…

Plucked from obscurity by some utterly lazy and contemptuous journalism Killdren suddenly found their music and personal lives being subjected to a similar level of scrutiny as those also recently banned drill rappers. Not that their newfound infamy seems to be bothering them. So where better to interview the demonic due (Efa & Nick) than on the roof of a building squatted for an anarchist art exhibition and gig. You can only imagine my disappointment when I discover that their rise to fame was completely accidental and not part of some meticulously executed master plan: 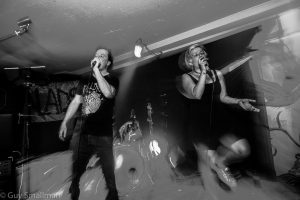 The sound of Killdren is perhaps best explained as an unholy union of their very different musical backgrounds. Both of which collide in the squat party scene:

Nick: “It was a natural fusion of the rave music background that I had which was free parties and the harder end of dance and rave etc; techno through to drum & bass, breakcore and hardcore-techno. So most of the sound was comprised from that, but with more humour.

Efa: “My background is being a punk vocalist mainly around the DIY scene. The idea of the band came when we were at Boomtown about three years ago and we saw Monster Zoku Onsomb. They are a funny kind of rave-surf band but we wanted to mix their influence with a bit of Dead Kennedys. “

“So we’re lucky that we can play at both raves and punk gigs. It doesn’t totally always work but I think it a cool fusion. We’re also influenced by the satirical stuff that Jello Biafra comes up with. He is super political but also uses humour to get stuff across which is not always what happens in punk which is a bit too serious sometimes. Humour is a good way to get your point across.”

“The world is so fucked up. If you keep telling people that everything is shit (which they already know) they will just switch off. But if you do it in a funny way, it gives it that human element. The name ‘Killdren’ came from me trying to say ‘children’ when I was drunk. It’s obviously a joke name and we’ve got the song called ‘Save the World (kill your children)’. There is also that idea of murderous children from movies like ‘Village of the damned’ and ‘Children of the corn’ when the kids rise up against the adults.”

“We’ve done around forty gigs now. Obviously our music will never have corporate appeal, but we have played a few normal venues. However it’s mostly squatted spaces and DIY events; especially when we’ve played on the continent. Also outdoor stuff like the family-friendly Fordham Park community festival – which was pretty hilarious. We’ve done protests too. Like the 48 hour blockade of the Preston New Road fracking site. We ended up sleeping in the road and playing through a broken speaker. It’s a kind of extension of what we do anyway. Participating in actions and projects.”

Despite becoming a household name overnight in pretty negative terms, Killdren are pretty unfazed by their newfound infamy:

“We weren’t really prepared for ‘Kill Tory Scum’ to be discovered two years after we recorded it. We got a message from a journalist from the Sunday Times about two weeks before the story broke. He told us he was writing a story about political violence relating to the milk-shaking of fascists; and that he was relating it to music. He must have stumbled across the video and then decided to make it more of a hit-piece about us in relation to incitement to political violence. We replied to his questions with a pretty reasonable statement and I think he was disappointed that we didn’t sound like a pair of complete psychopaths. We’d checked out his work and he didn’t seem like a super-bad tabloid guy, but it was pretty fucking gutter press in the end.” 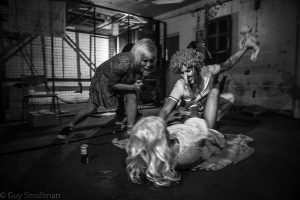 “And then the story just exploded. We knew it was coming out on that Sunday and we were both at different festivals. People were telling us “We’ve just heard about you on the radio.” Then it’s in the Daily Mail and The Sun and suddenly you get to see how the media really works. They just all recycled the same story and it got more & more diluted. The funniest bit was when Rachel Johnson on Sky News, who is Boris Johnson’s sister, has a serious panel of five people and none them even mentioned it was a joke and she was the one who ended up defending us. They were literally just taking it word for word serious. Not just ‘Kill Tory Scum’ but also the song ‘Save the World’ and they’re shrieking that we have another song that is calling for you to kill your children! What people seem to miss is that it’s just black humour. Most of my punk friends said: ‘ah like its not even that bad is it?’ There’s loads of punk songs with way worse lyrics.”

“We were wondering whether we should reply to some of these media requests. Our email was just mental. Loads of emails from Sky News, all the BBC radio channels it was pretty crazy, with the story getting more & more ridiculous with some people actually believing we’re from Tunbridge Wells. It was just a joke we’d put on our Bandcamp as in: ‘Disgusted from Tunbridge Wells’ the classic middle-England upset person. There was also this guy on Sky News talking about ‘these posh punk bands from Tunbridge Wells’, it was absurd.”

“We did reply to the BBC with a statement and they ran a fairly good version of it to be fair. Then the Independent said ‘we want to run an opinion piece written by you’. We said yes but we’d had to check it before they ran it. In fairness they put the whole thing in word for word.”

The band also responded with a satirical video in the form of a ranting diatribe by their ‘manager’ who introduced a new version of the song that mercilessly took the piss out of all the manufactured media outrage over the original version:

“The NME was pretty good to us as well. They showed our video response and they didn’t twist our words or try and frame it as we’re actually calling for the murder of people walking down the street, which is what the Metro did.”

“We had more messages of support than messages threatening to kill us, which was a nice surprise. Well maybe not a surprise considering the things that we’re singing about and particularly that song. A lot of people were like ‘fair play, nice one for getting the message out’. Which just shows how serious the issues are. Some messages of support were really heartfelt from people who’d been campaigning for two years to get their disability allowance reinstated and shit like that, so it was serious as well as frivolous.”

One thing that has been clear from the start is that the media have unwittingly gifted the band with publicity that money can’t buy and Killdren have been quick to exploit the situation.

“We’ve had to reprint t-shirts and CDs. We definitely sold quite a lot of stuff. It has paid for the second EP for fucks sake and also the microphones we bought so we could record it ourselves. So we’re no longer losing money on the recordings, we’ve probably broken even as a band now. The BBC kept posting this picture of a massive pyramid stage crowd. That was not even who we were going to play to. We were were scheduled to play to like 30 people at 3am, so the Glastonbury ban isn’t exactly the end of us. We’ve not yet checked the online distro account, but we’ve hopefully sold a load of digital stuff as well. More people have heard of us and we’re getting more offers, including one at Boomtown. We’re proud to have been kicked off by Glastonbury. We’re still going to go and we’ll take a load of t-shirts to sell and offer to other artists to wear.”

Since this interview Killdren gate-crashed Glastonbury and made no less than three appearances to enthusiastic and considerably larger crowds than they had originally expected:

So the moral of this tale is that punk rock (and its techno offshoots) will continue to feed (and potentially grow) off the outrage of the most easily offended elements of our conservative media. Killdren didn’t ask for their infamy, but rather hiding away have instead embraced it – to their considerable benefit. Nice one Mr Murdoch…