Can everyone please stop comparing Killdren to CRASS? The latter were all about ‘Anarchy and Peace’ a philosophy which sounded great from the confines of their countryside commune but saw its limitations broadcasted across the world as the Peace Convoy got splattered all the infamous beanfield by riot cops. Meanwhile Killdren lean more towards ‘Anarchy and feeding MPs alive into a giant mincer’ while broadcasting their message from the squatted spaces in the darkest corners of our cities. One advocated dropping out the other commands us to drop in like a fucking atom bomb. Understand the difference.

A lot has occurred since they last released some new material. They briefly deposed Jeremy Corbyn from his position as tabloid hate figure of choice over the Glastonbury debacle last summer. A pandemic has shone a light on the selfish incompetence of the Tories and Labour has returned to its comfort zone of having its tongue shoved so far up the arse of the establishment that no one can see any point in voting anymore. So its back to Plan A, and who better to write the soundtrack for these thoroughly shit times? 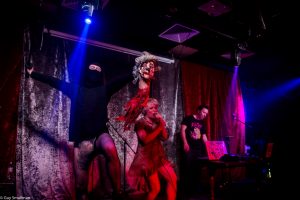 The demonic duo have been busy during lockdown conjuring up eight previously unreleased tracks to bring us a brand new album and it is most definitely their best work to date. The formula hasn’t really changed with Efa’s acidic punk vocals atop Nick’s techno-acid-gabba beats. But the overall sound and song writing has matured considerably since their last EP.

‘Expect a Crimewave’ kicks things off nicely with its abrasive commentary of the cesspool of hypocrisy that is the UK parliament. Atmospheric techno, that is almost reminiscent of those Aphex Twin side projects, underlays those trademark rhyming couplets before diving headfirst into a thoroughly danceable chorus. The production is smoother than their previous output and it compliments the vocals to perfection.

‘Mind the gap’ continues along similar themes as they both adopt the sarcastic posh voice, and carry it off very convincingly, before ditching the parody for some hard-hitting truths above a mechanised beat that Nine Inch Nails would have been proud of. Then it is straight into ‘Hands off our NHS’, which sees Nick put his educator hat on, as he delivers some truly eye watering statistics about health care in the land of the free before pointing out the links between the Tories and private healthcare providers. The tune underneath is utterly bonkers and all the better for it.

‘Self destruct nation’ is the only track we’ve previously heard. Released in response to the disaster that was year’s general election. It packs just as much punch now as it did then. An open wound set to music.

‘No more normal’ brings the band and their politics crashing through current affairs with a plea for the mutual aid groups that have stepped up during Coronavirus to set the agenda when the pandemic subsides. ‘Thoughts and prayers’ see the tempo drop down a bit as they perform what can only be described as a dark techno-hymn composed to celebrate the evil double standards of the church. ‘Dial 1312 for murder’ has a prophetic feel as it examines the role of the police in plenty of bleak detail. It is almost hard to believe that it was written before the murder of George Floyd. 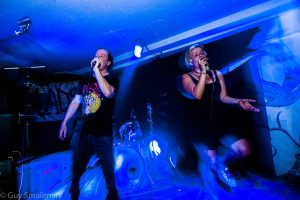 Finally ‘End humanity now’ sees us return to familiar territory as they express their desire for our species to stop existing by any means necessary. The present kill rate of COVID-19 must be quite a disappointment for them?

All told this record represents a step forward most musically and lyrically. The tunes are perhaps more accessible to those of us who veer more towards the punk than the techno side of things. Often quite minimal allowing more breathing space for the message contained in the songs. However it is the live shows that will really make these creations shine to their full capacity. I can only imagine the kind of theatrics that with be employed to illustrate these new gems and it is where you need to see them to get the whole story. Along with your CD, t-shirt and ‘Kill Tory Scum’ face mask. Can’t wait to see them play again.