On one hand Mr Sullivan’s fans are a thoughtful bunch, contemplating life’s great questions while appreciating great song writing. On the other they are obsessive followers whom are notoriously difficult to please. So that support slot comes with some serious potential pitfalls. Not that Jess Silk seems remotely fazed as she strides onto the stage strumming the opening chords of ‘S.W.A.L.K.” which also opens her new album. It’s a melodious love letter to that enduring spirit that kept some many of us sane during lockdown. Combining touching lyrics punched out with an earthy voice, the chattering in the venue ceases almost immediately and by the end of the first song we’re all a bit captivated. 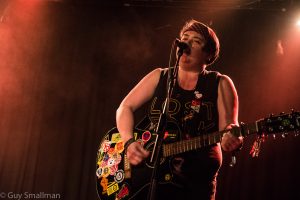 The rest of the set is punctuated with a brazenly political message. ‘Sea to shining sea’ examines the spectacular idiocy of the Trump years. ‘Stranger on the tube’ recall’s an unwelcome encounter with Tommy Robinson’s horrid fan base and we even get an uplifting cover of partisan classic ‘Bella Ciao’. Which is one of those tunes that you’re either going to do justice to or it will become a hill to die on. Jess turns that hill into a mountain of sing along euphoria. The question she seems to ask of us in ‘Is this poetry?’ was answered after less than half a minute of this excruciatingly short set. A triumphant beginning to this intimate show on an Autumn Sunday night and its fair to say that many here will be back for more when she next ventures into the smoke.

I can scarcely believe it – after a very long 18 months gigs ARE actually coming back! There’s been a number of them over the past couple of months, and finally Justin Sullivan too is able to tour to promote his latest solo album, Surrounded, released in the spring. And so off we go, to Islington on a Sunday evening – the venue is fairly busy although not packed (I suspect for quite a few people it’s still too early to go out socialising, and this won’t change for a while yet), and the sense of anticipation is palpable before the start; this is after all the first time many people in the audience (including myself) will hear the new solo material performed live, and I have to admit the album hasn’t quite gripped me yet, so I can’t help wondering whether hearing its songs live will finally help me “get” them (like it normally happens with the full band albums) or my initial impressions will be confirmed. 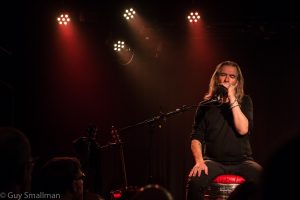 It doesn’t take long for any doubts to be dispelled, however – within a very short time it becomes clear that Justin Sullivan hasn’t lost his magic touch; songs from Surrounded (about half of the album will be played in total) are interspersed with recent and not so recent New Model Army tracks, all are played with great passion, the setlist choice works very well and Justin himself is chatty and quite obviously happy to be back playing live, regaling the audience with various stories about how the various songs came about. As I was hoping and kind of expecting, the new tracks truly come alive when performed…er, live, and the old ones never age. Personal favourites Marrakesh, Bad Old World and You Weren’t There are part of the set, which makes me rather happy, and amongst the solo material Amundsen and Stone and Heather deserve a special mention. All in all, a fantastic evening, an experience which had been sorely missed by all over the past year and a half and with a very well-behaved crowd too for once… bar one solitary idiot, who gets a mention, however, for the weirdest heckle I heard in quite some time, which I have to admit did make quite a few of us chuckle: “You’re not Sigur Rós!” aimed at Justin before (fortunately) disappearing downstairs not to be seen again.

Changing Of The Light

Eyes Get Used To The Darkness