Jawless formed in 2016, and quickly gained a rep’ in the London punk scene for playing heavy and groovy metallic hardcore. The band members are from Spain/Poland but the band was formed and is based in London. One time I saw a scaffolding plank fall and hit their drummer on the head during their set at the Carnival Punks Summer Skate Jam- he just carried on drumming! It was awesome! 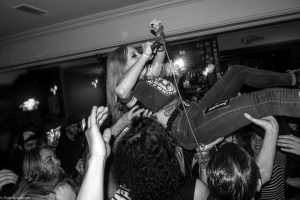 In Under Control they really go for it from the start, it grabs your attention a.s.a.p with a big fat guitar solo! They’re not here to fuck about. That metallic hardcore groove kicks in in the first verse and your head starts bobbing of its own volition to furious riff-age and drum beats. Tone: set right away, by musically squaring up to you- militancy reflected in Teresa’s lyrics about “taking back power to the streets”. It’s suitably followed by Until Every Cage Is Empty, a song about Animal Liberation- duhh! Classic punks!

After this comes Blood In Your Mouth. Personally I saw a lot more of Jawless’ punkier influences come through in this track. In parts of the song the drum beats are a lot more typically “punk rock” sounding- as opposed to the technical drumming the album is mostly filled with-; and towards the end of the song there’s a nice bit of 4 chord magic, which stands in good contrast to the rest of the release. God Is Dead is the final track, finishing off their side with some classic punk rock irreverence! I pretty much understood this anti-religion song to be pretty much saying, “C’mon guys, aren’t we too old for this by now?!” to the Church.

On the whole, these songs are on point considering that Jawless have been playing together for a few years now. It’s a good demonstration of what they can do. In their next release- fingers crossed for a 12”!- I personally would want to see more variety in the feel of their songs- some atmospheric breaks so that those heavy grooves hit you harder, or some noise wouldn’t go amiss; and also, some more original subject matters dealt with in the lyrics. This is just the beginning; I can’t wait to find out what move Jawless will make next. Let’s hope we find out soon!

Overload are a band I’ve had a lot to do with over the years. Their ace blend of OI!, Streetpunk and Motörpunk first blew my mind when I played with them at my second ever gig in London. It blew my mind at FUK Reddin Festival (R.I.P) a year later. And it blew my mind when I last saw them in London a few months ago. I’ve had their album Godkiller (2010) on my phone for about 4 years now because it gets me as pumped as some of my all-time faves do.

Gutteral is Overload doing what they do best. The release begins with a rager called Lumpenprole (Lumpenprole is a Marxist term referring to the unorganized, and un-politicized, lower classes). A far off, tinny sounding drum track lasts for about 10 seconds, and then whaaaam! you’re away, the momentum picks up hard. It’s swiftly followed by Violently Domesticated; a heartfelt song about rape, and how our society deals with it. It even contains quotes from the diary of a young sexual assault survivor, and they’re utterly harrowing. Noise is next; a reminder that, “for the love of OI! We’re doing alright!” even though you’re actually just “struggling your life away” in debt. 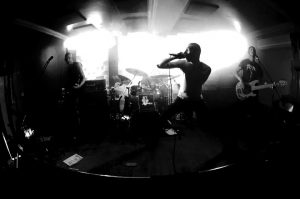 I particularly enjoyed the second half of the album, the next 3 tracks blend into each other, in true street punk fashion. The Future Is Over- a vaguely atmospheric track- builds and falls over and again, an intermediary build up which soon ends into feedback and effortlessly feeds back into 2000 Luddites where the drums just kick in again out of nowhere, and at full driving force! Riffs arise- in all their punk rock glory- from the ashes of the feedback alongside that powerful, fast and precise drumming; the song ends and then there’s this one second rest before the Cro-Mag’s esque intro to Congo’s comes in.

Teo’s lyrics talk about some serious shit- armed revolution, rape, debt, social barbarism, ethnic cleansing- but at times, like in Noise- with the ‘we’re in debt but it’s alright!’ vibe- and Congo- Where the only lyrics are, “Is ‘ethnocleansing’ even a word?”-, he manages to do what a lot of people fail at when making serious punk songs: maintaining that punk rock sense of humour about it. In “Lumpenprole” less lyrics are more. The chorus is calling shouts of “Lumpenprole. And with four lines between the two verses, every word counts. Like a D-beat haiku!
At the end of the day, Overload have been going since 2003 and are a band that are filling a musical “gap in the market” in the UK punk scene- few band’s sound like them at the moment. Because of this, I don’t think the question I should be asking is, ‘Have they put out a good album’- because we all know Overload can put out a good album-, but rather, are Overload progressing their sound? Are they taking musical risks, and bringing new ideas to the table? That being said, this 10” album hasn’t left my currently-being-listened-to vinyl stack since September 2019, 5 months ago. So it’s a thumbs up from me boys.