Twelve years, four albums and an ocean of critical acclaim and I still haven’t seen this band until now. I missed every opportunity to catch them before they were cool and now they’re selling out four nights at Brixton Academy and I’m still none the wiser.

The band arrive on time without any theatrics and launch into the pounding heartbeats of ‘Colossus’. Bathed in blood red lighting as the adoring throng before them sing along to every word. The place properly erupts as the song charges into its banging conclusion and already I’m pretty damn mesmerized. Then it is straight into the stinging notes of ‘Car Crash’ from the latest album to affirm that they’re definitely not mellowing with age. They’ve been joined onstage by Colin and his giant sax to add some brutal brass to the mix and the narrative sways between the beat poetry of front man Joe and screaming strings of the hyperactive long-hairs behind him. 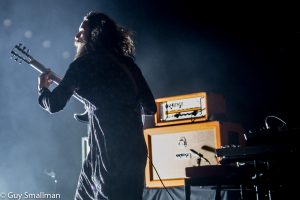 ‘Mr Motivator’ takes it up another notch with its life affirming celebration of insurrection and a gigantic surf chorus. ‘Grounds’ comes across as yet another call to arms and pink fists are raised across the dance floor. If the simplistic way in which they preach their message has been the main catalyst for the vitriol they’ve attracted then the detractors seem to be missing the point. The clumsiness of Joe’s lyrics is not parody of class anger. Just his unfiltered way of doing things in a band that string together five unique and extremely brash elements and somehow make them work.

That said, bassist Adam and drummer Jon are a cemented single unit of pulsating rhythm that provides a solid stone base on which the other three can perform without fear of crashing through the floorboards. The beats and bass lines are simple and delivered with little fuss and pinpoint precision. The foundations of ‘Mother’ & ‘Meds’ both rekindle memories of when I first heard the metallic binary patterns of Big Black. ‘Divide & Conquer’ has an equally doom laden feel to it before exploding into yet another upbeat noise fiesta. 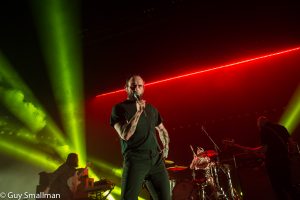 The counterbalance for the faultless machine that is the rhythm section are the barking mad antics of guitarists Mark & Lee who tear around the stage like a pair of frenzied marionettes, it is exhausting just watching them. But simultaneously mind-boggling as to how they manage all those acrobatics while still keeping time to perfection. Most importantly they’re clearly having the absolute time of their lives feeding their sketchy yet felicitous collection of howling notes and abrasive chords into the mix and off each other.

Which brings us to the troubled psyche of Joe. Tonight he says very little preferring his soul baring and often brazenly progressive lyrics to do the talking. His bullish vocal style is often delivered in monotone but never monotonous as he struts his stuff across pretty much all of the academy’s vast stage. Arriving late to this party and only having read about this band up until now, I’m left wondering why he has attracted so much venom from his peers. While it is an unwritten rule of the music world that anyone with a political mind has to be ruthlessly shot down for their own good, I can’t help thinking that there are more worthy targets. He’s a passionate performer who seems to be enduring his rise to stardom rather than embracing it. All the while punting out swathes of heartfelt gratitude to the people who’ve put him there with warmth and humility. 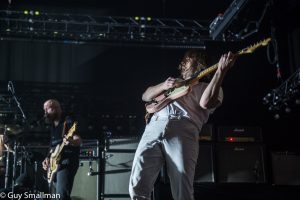 We get a welcome chance to catch our breath with ‘The Beachland Ballroom’. A crooning, soulful ballad that taps into a melancholy from those abandoned dance halls of yesterday. Another highlight for me is the beautifully atmospheric ‘When the lights come on’ which transports the listener to a serine place where absolutely nothing needs to matter for just over three minutes.

Those two aside, the rest of the set is very much like having my eardrums smashed to a pulp in the most agreeable way imaginable.

‘The New Sensation’ is a frantic tirade that mercilessly lampoons the government’s short sighted and culturally genocidal retraining policy. Then ‘1049 Gotho’ piles in with a steaming juggernaut of layered guitars that boots the listener into the cavernous void that is manic depression. They sure as hell don’t shy away from those difficult subjects. Which goes some way to explaining their cross-generational appeal to so many of our emotionally stunted English brethren. Everyone has an ugly inside that matches the beauty whether they admit to it or not and this crew put the spotlight on all of it. 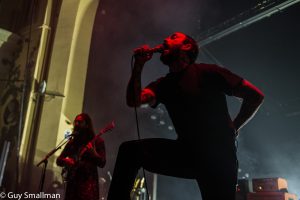 They’re not a band that can be easily categorised. They are certainly a hard-edged rock act with an enormous heart for which ‘post hardcore’ tells part of the story. Tearing up pretty much every rule of song writing to produce a collection of blunt yet alluring compositions which charm the recipient while also beating them into submission. Comparisons to the Pixies and early Joy Division are entirely appropriate. Though they do find time to take the piss out of themselves with an improvised medley of cheesy eighties choruses.

The twenty song blowout of raw power concludes with some well chosen words to introduce the timely pro-immigration classic ‘Danny Nedelko’ before ‘Rottweiler’ offers one final assault on our senses. I came here tonight hoping (in the name of balance) to find some excuse to denounce the hype and affirm the snide critiques of the haters. Instead I’ve failed miserably and been enchanted by a band whose live show is nothing short of astonishing.