I was trying to describe the unique sound of HEADST!CKS to a friend when someone piped up: “Imagine if the Undertones had been heavily influenced by Billy Bragg rather than just whining about their angst.” All in all a pretty good summary, except it only tells part of the story. While they have mastered the melodious punk sound they also fully appreciate the proletarian power of the unplugged guitar and that is very much the foundation on which their castle is built.

A lot has occurred since they released their last album in 2019. Back then we were almost daring to experience that rare thing called hope. Jezza had pulled off a stunning humiliation of the Tories eighteen months earlier and pandemics were just scary things from Stephen King novels. How much has changed since then with electoral disaster and the predictable explosions of rage seen from Belfast to Bristol.

So right now a new record from this lot could not be more necessary. If there is one thing that we need for the sake of our own sanity, it is the pugnacious, politico-points, punched out by the punk poet that is Andrew Tranter. 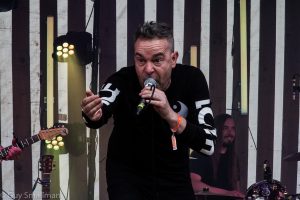 If you need an introduction to this bloke’s need to fearlessly dive headfirst into the darkest corners of injustice then fast forward to the album’s epilogue: ‘Sing Danny Boy’. A gritty study of abuse so utterly gut-wrenching that it would be unlistenable did in not end in triumph and redemption.

Rewinding to the start and the first few numbers bring us the more refined electric sound that HEADST!CKS have developed yet further since their folky beginnings.

‘Red is the Colour’ is a thumping rock n roll tune that takes a sardonic swipe at the glorification of war. ‘Peace & Quiet’ sees Andrew’s soulful vocals decry our impending environmental catastrophe and ‘Mile and Miles’ is a rolling steam train sing-along of clattering drums and impeccable guitar work that respectfully tips its flat cap to the man in black.

The tempo drops slightly for ‘Tear for Yesterday’ and then the distortion pedals get switched off altogether for ‘Tyger Tyger’ a beautiful lullaby that pays homage to William Blake and the gentler moments of Led Zeppelin in equal measure. It mirrors ‘Opium’, which appears further down the set list and reminds us just how this group can deliver serene ballads that equal the power of their noisier moments.

They continue the return to their acoustic roots with ‘This Ain’t Politics’, which sees the introduction of some welcome slide guitar and the mixture of punk attitude and up-tempo folk that is ‘Red Sky’. So many musical traditions are being saluted to such perfection. It is no wonder that they are one of the most sought after acts for the festival circuit. 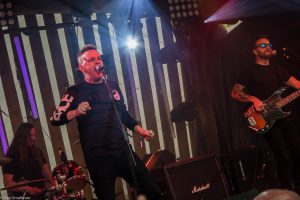 The electric sound returns for ‘Burn’ and then gets turned up to eleven for ‘Speak Out’. A brutal song, powered by abrasive chords, that melds the iconic anti fascist diatribe of Pastor Niemoller with the absolute injustice of modern austerity. Andrew wastes little time on subtlety when he is in full on rant-mode, nor should he.

There is of course one towering track that surely must be surely be a contender for single of the year? ‘Naked’ is their finest moment to date and is sure to make those mosh pits explode when their live shows eventually return. It shoves the reality of all that is wrong with the world into your face with the urgency brought by those political awakenings that runs like a high voltage cable through all of this bands work. The emperor is indeed naked but the core message is: What the fuck are we going to do about it?

There is a wealth of emotion and a vast musical landscape explored in this, their finest LP to date and it is without doubt one of the most essential releases of 2021 thus far.