Dubioza Kolektiv can honestly make two claims that many bands would sell their organs for. Firstly that no one else looks like them. Imagine a slightly crusty baseball team on acid? Secondly and more importantly that no one else sounds like them. Their fusion of hip hop, gypsy punk and electric ska makes for a truly unique experience and that is even before you consider the onstage antics. The clowns have deposed the ringmaster and the circus is a much better place for it.

Having stolen the show at numerous festivals around the UK they are now comfortably filling venues like the Concorde with an adoring fan base that representing a big cross section of the gig going public. 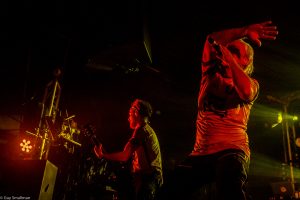 They open tonight with the slapstick hilarity of ‘USA’, which has long been a live favourite. But it is the new material that we’re most eager to experience. Last year’s ‘Fake News’ LP saw the bands sound evolve in new and different directions as they collaborated with a range of artists that they respect and admire in equal measure. ‘Minimal’ is up next and it was definitely composed (alongside techno act Soviet Suprem) to be experienced live and loud. The pounding dance beats beautifully compliment the Dubioza sound and the place erupts. They give a quick name check to the new record and instruct the crowd to download for free from Pirate Bay, instead of buying it, which also introduces ‘Free MP3’ from the previous English speaking album Happy Machine. While their generosity is commendable you can’t help thinking that they’re volunteering themselves for oblivion. While no one expects to make a living from record sales these days, their philosophy could well see those live shows being undercut by unscrupulous chancers replacing them with pirated holograms once the technology allows?

‘Wild Wild East’ is another new number that allows those electric pulses to take centre stage alongside those traditional Balkan tunes. Then we get ‘Cross the line’ their recent collaboration with Manu Chao which rails against the idiocy of borders and its associated razor wire and watch towers. Sadly Mr Chao himself was unavailable for this performance, but they pull it off splendidly without him. While they may well be the ultimate good-time party band their work has a seriously subversive message, which is worked into the songs at every given opportunity.

In between the songs they speak of their pride in having someone in the band representing each of the once warring factions of the former Yugoslavia. These are people who grew up under the shadow of extreme nationalism taken to its horrific conclusion and they have plenty to say about the state of the world today and how Western Europe seems hell bent on making the same mistakes that tore their own country apart in the 90s. 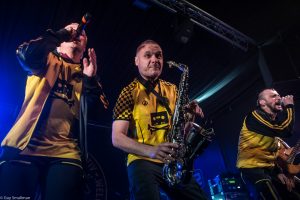 There are of course two bands playing here tonight. The Dubioza crew write albums for both their home and foreign audiences so we also get a fair compliment of brilliant tracks from Pjesmice za djecu i odrasl the 2017 record sung in their native tongue. Tunes like ‘Domacica’, ‘Himna generacije’ and ‘Internetska’ do much to prove beyond all reasonable doubt that language really is no barrier to an awesome gig experience.

Then we get ‘Take my job away’ the blinding new single that opens with some robotic vocals borrowed from Kraftwerk before morphing into one of the most banging rock tracks in their catalogue. Part of their charm comes from the clever and extremely funny lyrics, which accompany their music. They put very many English speakers to shame with their instantly memorable words of comedy wisdom. Maintaining the tempo ‘Boom’ raises the roof yet further with its surreal narrative and stomping ska-punk mayhem. 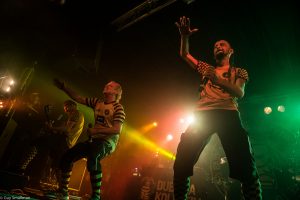 They give us a welcome breather with the down tempo reggae of ‘Hoy Marijuana’ which resulted from teaming up with Mexican latin-ska outfit Los de Abajo for the last LP then its back to the exhaustive, sweaty, yet joyous mayhem for pretty much the rest of the gig. ‘Red carpet’ is a particular highlight as they explore the grimness of seeing their world tip from Stalinism to neoliberalism as the people underneath remained at the bottom of the pile.

By the time we’ve reached the closing insanity of ‘No escape – From Balkan’, a tune that celebrates their roots while lampooning the stereotypes in perfect punk splendour, the sea breeze is blowing in from fire exits opened by concerned door staff but we’re still boiling over. They are a truly unique live experience that inject their politics into a high energy show that could melt the coldest of hearts.