With those gigs still many moons away we’re still very much reliant on our musical fix from material recorded before lockdown to ease our house arrest. Dealing With Damage are an interesting bunch whom hail from very many bands too numerous to mention and churn out a complex sound drawn from their many influences.

So following on from their debut album ‘Ask the Questions’ the political four piece have gifted us with a new EP entitled ‘Home Security’ containing two previously unreleased tracks and an unlikely cover.

The three new tracks – two originals and one cover of a 13th Floor Elevators song – were recorded last summer at the legendary No Recording Studio, situated on a farm in Rayleigh Essex, with recording supremo John Hannon at the controls.

‘Lady day’ reminds us of the golden age of angst-ridden political punk that bands like The Members set the bar for. The track explores racism, sexism and the triumph of the human spirit over a system of rule devised to crush exactly that, through the life of jazz legend Billie Holiday. Its layered guitars and rich choruses complete a perfect two minutes of polished old school punk with a big social punch.

‘Making Plans For Misery’ also has a brazenly political message as it examines the seldom reported horror that is the imposition of sanctions on countries that our loathsome rulers have political differences with. The words that accompany this furious new wave tune spell out the psychopathic calculation employed by countries in the west against the innocent peoples of regimes like Iran & Yemen while their rulers sit in their palaces unaffected by this economic tyranny.

Finally we wouldn’t usually encourage any punk band to explore their inner hippy and would likely deploy nothing but derision on their attempts to do so. But final offering ‘Dust’ from those aforementioned psychedelic pioneers is actually quite a soothing offering for these troubled times and brings a nice mellow counter balance to the two minute fury of the previous tunes.

Looking forward to seeing this play, when this thoroughly tedious attempt at an apocalypse finally draws to a close. 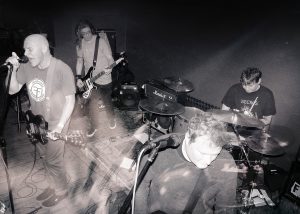