There is a certain house style that characterizes radical rhetoric and left wing songcraft. The horrors of the present tend to be juxtaposed against a sense that the struggle is ongoing and that eventually we will win. In David Rovics‘ latest album, the latter is paired town to the minimum that the listener can subsist upon.

If you are looking for a pick-me-up amidst the misery of winter, and a crap Labour leadership contest, then this is not it. Instead, it is an unusually fresh shriek from Trump’s America. It kicks off with a painful and powerful song about the peculiar mess that made out of Los Angeles. “There is no dustbowl” Rovics sings of the city that drips embarassingly with wealth, whilst thousands upon thousands continue to migrate into their cars or onto the streets, producing a civic life reminiscent of interwar America.

Rovics’ strength as a historical story-teller shines through in this album. Without compromising the poetry, he packs enough real-life details into his ballads that his characters do not collapse into the issues that they illuminate. Particularly strong is his song about his own ancestors My Great-Grandparents were Refugees. It tells a collection of bitter stories beginning in Budapest, Tsarist Russia and colonised Ireland – and of hardship that did not dissipate upon arrival in New York. 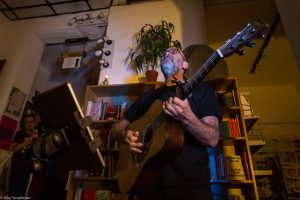 In this song and others the sound of an Irish whistle adds a great deal. The album itself was recorded in Ireland, in the home studio of Pol Mac Adaim. The production is great, and the instrumentation – involving wind instruments and harmonies as well as David’s guitar – is very well done.
Moments of hope are counterpunctual and unannounced. Jock tells the true story of an Australian man who still languishes in a Bulgarian jail for his show of great courage in taking on a group of men who were attacking some Roma citizens.

Towards the end of the album comes its standout song I was A Stranger. It deals with the trial, and potential 20 year prison sentence, that faced Scott Warren for the crime of providing water, food and shelter to Central Americans who were trekking into the United States without documents. Yet it is also a moving testament to the age old tradition of carrying an extra jug of water for a potential stranger when travelling in the Arizona desert, and to the humanitarian Christian sentiments that still resonate even in places where the ultra-right control the Governor’s mansion.
In an age of cliched culture wars, and of red and blue marketing campaigns, David Rovics’ skillful and sincere songcraft, and his attention to detail, is somewhat nourishing. And I’ll be listening to these songs again and again throughout the year to come.