Radical folk artist David Rovics is presently in the UK with a string of new songs prior to hitting the studio for his latest album. We caught up with him to get his thoughts on what the hell is going on. Both over here and across the Atlantic:

You’ve got a presidential election coming up this time next year, is this piece of shit really going to get elected again?

This is about as easy as predicting what’s going to happen with Brexit. But my general feeling is this: the leadership of the Democratic Party is even richer than the Republican leadership (this is a fact), and completely out of touch with the working class majority of the country’s population. If all they can offer up is a hopelessly corrupt buffoon like Joe Biden or a former prosecutor like Kamala Harris, then Trump will probably win again, for all the same reasons he won in 2016. If the Democrats are able to offer up a candidate that has actual appeal among working class voters, such as Bernie Sanders or Elizabeth Warren, then I think Trump is likely to lose. This is all, of course, assuming that the 2020 election will actually take place as planned.

Well, first of all, the US was a disaster before Trump came into power, let’s just get that out of the way — Trump is just sort of the logical conclusion of an extremely, institutionally corrupt system. But some of the stuff he’s been doing, as far as I know you have to go back to President Andrew Jackson almost two centuries ago to find similar examples. The Trump administration has repeatedly ignored court judgments they’re legally obligated to follow, and most of his cabinet are “acting” heads of departments, who have not been approved by Congress. There’s a fair amount of unprecedented stuff going on that is very reminiscent of the early years of Hitler’s rise to power. But maybe the elections will go ahead as usual, for whatever that is worth.

If a credible democrat does win what can they really achieve in light of the Obama experience?

Obama is a neoliberal in the Tony Blair/Clinton tradition. So there was never any serious hope he’d change anything, among those who were really paying attention, to policy rather than to speeches. But even if an actual progressive won the presidency, that person would be up against the entire Democratic and Republican party establishments. So anything such a president could achieve would depend entirely on social movements pressuring for real change, as usual.

Also talking of elections, we’re having one here, what are your thoughts on our prospects?

It’s a very strange situation. You have to vote for a whole bunch of Blairites in order to get a truly radical prime minister, who will be hamstrung by all three neoliberal parties before he ever even takes office. I really don’t know, but I think both our countries appear to be doomed. 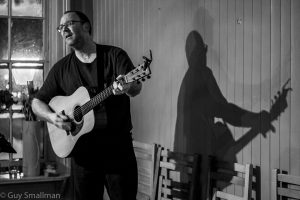 Is anything giving you hope right now?

At the moment, the fact that there are massive protests happening in Barcelona, Hong Kong, France, Algeria, Lebanon, Iraq, Chile, Ecuador and a bunch of other countries is pretty exciting. Things can sometimes go from looking very bleak to looking somewhat hopeful very quickly. This would seem to be one of those moments in history, though it’s too early to tell. I’m also impressed by the scale of organizing around climate change, especially throughout Germany, Sweden, and London. And reservedly hopeful about the prospects for the upcoming British general election. It’s a totally bizarre political moment throughout the UK right now, but it comes with some radical potential — whether or not that is even partially realized is another question entirely. But reason for hope, it is.

You’re well known for a prolific output and running a musical commentary on our times. What new songs can we expect in the set and what are they about?

I spent the last week of October in Ireland with several great musicians working on my next album, which will be titled Strangers and Friends. It’s mostly new songs, sometimes on new subjects, but basically exploring the themes of solidarity, direct action, how much capitalism and imperialism suck, climate change, foreign wars, concentration camps, cheery stuff. Well, really, cheery for those who can’t stop thinking about these things all the time, and probably depressing for people who are managing to remain blissfully ignorant…

How does the UK compare to your other touring experiences?

I’d probably have to find a different job if not for the UK. It’s been years since I’ve been able to tour in the US without losing money. I still have a big audience in the US according to YouTube statistics, but in terms of actual paying gigs organized by people who know what they’re doing, the UK is full of great gigs for me. In some other parts of Europe there’s more access to a lot of institutional money from unions and leftwing political parties, much more than in the UK, and I have great tours in Scandinavia, Germany, Switzerland, Belgium, largely because of that factor. But my biggest actual audience outside of the US is the UK, hands down. Attila the Stockbroker and Andy Kershaw bear a large part of the responsibility for this, but there are many other factors.

Interview and images by Guy Smallman