On Saturday hundreds of people marched through central London in support of Julian Assange whom remains in the brutal Belmarsh facility awaiting an appeal by the US government over his extradition to the USA. If successful he could face a sentence of up to 170 years. Assange was deemed to be at risk of serious harm or death if extradited by a judge earlier this year. The fact that he remains on remand awaiting this appeal is in itself extremely rare in legal terms but sadly typical of his treatment by the British legal system at the behest of the United States. 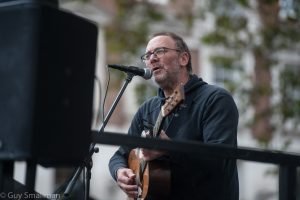 The march ended with a rally outside the high court in the Strand which was opened and closed by radical American folk musician David Rovics. His song ‘Behind these prison walls‘ which was composed specifically about the plight of Julian Assange struck a powerful chord with the assembled protestors. The video for the song was filmed at Belmarch during David’s last visit to the UK two years ago. The final tune for the event was the searing balled of contempt for the hypocrisy of the USA government ‘Failed state‘.

Rapper and activist Lowkey was next and wasted little time in reminding those assembled of the absolute hypocrisy and double standards of the mainstream media whom have raked in millions in advertising revenue alone from the work of Julian Assange and Wikileaks. But now they are greeting this case of landmark importance for journalists everywhere with what can only be described as a media blackout. Though they have found the time to orchestrate a decade long character assassination of Assange at the behest of Western governments. He also pointed out that the war criminals like George W Bush and Tony Blair who are responsible for the deaths of up to one million Iraqis are now being lauded as respectable political pundits on the world stage while Assange who helped blow the whistle on their crimes remains incarcerated in appalling conditions. He said that the physical and psychological torture endured by Assange since his jailing in Belmarsh amounts to state sponsored attempted murder.

Rovics and Lowkey join many other names from the world of music including Roger Waters, Brian Eno and rapper MIA. Next Wednesday and Thursday there will be demonstrations outside the high court with a range of speakers in support of Assange, Wikileaks and media freedom.