Chinned- and the rest of the Stevenage Grindcore Mafia- came straight outta Hertfordshire last summer. Settling their line up after their 3rd show, they’ve been smearing London’s floors and stages with a rank slurry of powerviolence and hardcore. Their August 2019 demo Lets Be Friends displayed heavy slow moving riffage locked in a struggle with endless sesh jokes such as “Is Ket Vegan (I’m asking for a friend)” and “KCIDERINSIDEHER”.

Aaron, the guitarist, describes Chinned as, “sitting comfortably between hardcore and powerviolence…[but] our own slower powerviolence box if that’s such a thing”. None of the band members play their main instrument in Chinned either. By nature, the singer is a drummer, the guitarist is a singer, and the drummer and bassist are both guitarists, meaning they’ve probably had to pull together harder than most to musically ‘gel’ so quick. I’ve not heard of anyone intentionally doing it like that before. It strikes me as a progression of the traditional punk rock ideal that you don’t need any technical know-how; but they’ve clicked like a band that have played together for years, so clearly, it’s worked.

In under 7 minutes Chinned manage to guide you through a whole range of different sounds taken from the more extreme end of the punk/hardcore spectrum. As well as being sprinkled with blast beats, Meth Actor and Running Headfirst Into The School Shooter feature the kind of slow bits you’d hear on a Spazz record, next to parts that you could throw down to on Ruktion night; and it doesn’t feel duct taped together at all, fully the opposite actually! Zed’s Dead Baby (Zed’s the pervy cop with the gimp from Tarantino’s Pulp Fiction) takes us in a more crusty hardcore direction; in my opinion it’s the crescendo of the whole shebang, and it’s a solid contrast to emphasised slowness found throughout. The final song is Clipping Teeth, the title track swaps between slow power-violence and parts that came across a bit UK82ish, before coming back from in for a final blast of cold hard riffage at the end. If such a thing qualifies as a victory lap I’d say it was just and well earned, I thought it gave the ending a morbid and gargantuan feel. 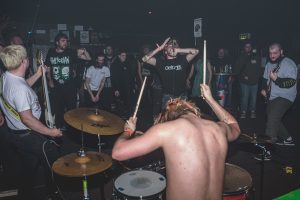 I loved the lyrics on this EP! I have no idea if it was intentional or not, but I noticed that they mainly fit into two categories. The first one- see Meth Actor and Clipping Teeth- uses intensely dystopian imagery to make political statements; and the second- see Running Headfirst Into The School Shooter and Zed’s Dead Baby- thoroughly takes the piss in every aspect they can. I found their jokes about white people loving Pulp Fiction especially hilarious, because Tarantino does seem like a bit of an incel (Fight me).

I’ve only listened to powerviolence for a few years, and before that I didn’t really know a whole lot about it. The things that drew me in were the blast beats, the groovey bits, and the strict code of either ‘harrowing or hilarious’ samples. A few years later these criteria remain pretty much the same, and Clipping Teeth ticks all them off. The only thing I feel that needs to be said is, and I direct this to the band themselves, why the fuck hasn’t my cassette tape arrived?