Considering that they’ve been gigging since 2015, BKS are London punk scene regulars by this point. Their first 2 EP’s- The Baptist Killing Spree demo (2015); and, I eat bugs (2017)- are short and sharp works of art that gained them some following relatively quickly; and -fun fact, seeing as we’re on topic- in 2016 they were meant to do a split EP with my own band, Migraines, but it never happened because we’re all useless sacks of shit..!

DIY TNT begins with a whiplash barrage of one minute songs. Songs about rat race bullshit, brutal police assault, and being fast as fuck- cuz why not, I guess! The raw and regressive patterns found in some of the guitar riffs turn the songs into confrontational and abrasive expressions of rage, rigidly defined within the ‘hardcore punk verging on fastcore’ parameter.

BKS choose to include a cover of Cro-Mags, Hard Times (For any noobs out there: Cro-Mags, Age of Quarrel is an absolute classic!). In my opinion the EP would have been tight without it; I guess it’s in there for the fun of it. After this halfway point in the album the bangers come out, and they truly start to up the bar from their previous release, I eat bugs (2017). Whiskey Business- a fun and shout-alongable song about drinking whiskey for 3 days; I’m Out- with its groovy intro and tongue twisting tirade of lyrics; and Space Force- which alternates suddenly between relentless bass picking hardcore and ‘one-two-three’ waltzy-discordant screaming- all stood out to me as highpoints in the release. 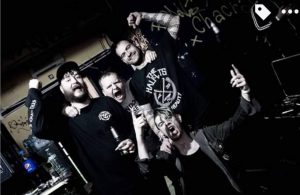 The lyrics have a pretty good balance of introspection and extrospection. The introspective stuff comes across as a bit “tongue-in-cheek” at points- such as in Joker the line, “hear my voice… fuck you!” made me laugh. I like when writers talk about serious, real stuff but kind of make a joke out of it. It stops the whole shebang from looking like a therapy session, and keeps it entertaining. The writer pays due attention to the metre of the words so as to deliver them in a primo frantic-ADHD-kid style- as well as a few attempts at 8 bar lines. He does a good job, however at points I felt that the imagery he used can be a bit unclear, which obscures the overall message of some of the songs.

The only other criticism I have of DIY TNT is that there seems to be a distinct lack of intentional structure to the EP- instead they fall into the classic subconscious trap that a lot of DIY bands who self-release fall into: which is putting the songs that you think represent you/your subgenre/your aesthetic- in this case, BKS: “Fast-as-fuck hardcore”- in the first and foremost half of the release, and then putting the more divergent songs, or the songs that are a bit more “natural” to the band members personal influences on the second half. The album’s final and title track, DIY TNT, finishes off the with an appropriate contribution from Chris- “Im a monster homegrown TNT, unfuckable with, uncaged, set free/ I’m fuckin invincible!”.

When all is considered, I think DIY TNT is a good release, it shows BKS bossing it to the same standards they always have, but I think their sound would really benefit from them pushing their boundaries a bit and doing a full length release. Forcing them to evoke some different reactions from the listener and hone a presence uniquely “theirs”. Honestly, I’d love to see how it pans out.