Despite releasing the highly acclaimed ‘Soundtrack to the struggle 2’ just a few months ago, Lowkey has already dropped a new song and video from his next LP due out in 2020. Iraq2Chile (Martyrs for Hope) is a commentary on the upheavals being witnessed right now in both Iraq and Chile and the common link between them. The unrest in both countries is a product of the suffering and standard of living endured by the people due to the imposition of neoliberal capitalism. In the case of Iraq, the oil rich nation has seen recent riots and over three hundred deaths since protests against corruption began on October 1st.

Meanwhile in Chile hundreds of thousands of people have paralysed the country during protests over what they see as thirty years of economic injustice and a growing gap between the ruling elite and pretty much everyone else. Both countries have had an economic model imposed on them by the West. Iraq had its Baathist economic model destroyed after the illegal invasion of 2003 by Britain & USA. While most Iraqis were pleased to see the back of dictator Saddam Hussain they had enjoyed far higher standards of healthcare, housing and employment than many other middle east countries. In Chile the process began in 1971 when the elected socialist government of Salvador Allende was overthrown in a CIA backed fascist coup.

The video accompanying the song shows powerful footage from recent protests in both countries along with archive footage of republican presidents who championed neo liberal economics to begin with. The lyrics are displayed and illustrated by the footage and some truly slick editing which brings a powerful and educational experience in what could well be our top single of 2019. Lowkey will be hitting the road in the spring to promote Soundtrack to the struggle 3 which is looking set to be yet another collection of hip hop anthems that make sense of a world tipping towards global revolution. 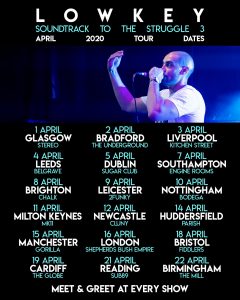