It was always going to be an occasion. When the musical wing of the First Presleyterian Church of Elvis the Divine announced a special service to salute ‘Exile on Coldharbour Lane’. The twenty-something year old record that defined so many of us in so very many ways. It was already billed as the mother of all homecomings and then the unthinkable happened. The very Reverend D Wayne Love caught an early train to Mashville and this became so much more than just a commemoration of a brilliant album. 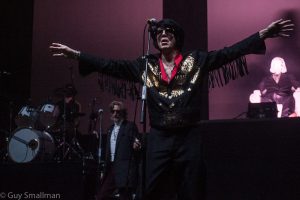 Brixton’s most magnificent place of worship has a full congregation with the cream of South London’s underbelly and the whole damn place stinks of weed, as it damn well should. The Reverend sits approvingly on his throne as the band add idolatry to their ever expanding list of sins. He also joins us in digital form, both in audio and upon the giant screens behind. This is set to be a wake like no other.

Tonight also sees the return of many lost sheep to the fold with the regular line up expanded to include Devlin Love, IV Lenin, Sir Eddie Real and the very Reverend B Atwell. Meanwhile Rob and Orlando have arrived at the party as Elvis and Pricilla and the onstage security are dressed as fast food. We expect nothing less.

Theatrics aside tonight offers a mind-blowing reminder of what an incredible achievement ‘Exile’ really was. Nothing ever sounded like it before and nothing has surpassed it since. It was the anthemic call to prayer for the destitute and downtrodden with a pounding groove that spread across the world from its Brixton epicentre. 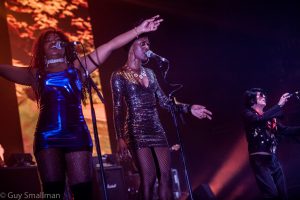 ‘Converted’ sets the pace and immediately the entire floor is swaying to the chorus of ‘Lets go back to church’ not that many of us ever left. This band have seen us through the good times and the bad for well over two decades without ever losing their mojo. ‘The speed of the sound of loneliness’ raises the tempo yet further before the mighty temple explodes for ‘Woke up this morning’ the gigantic hymn that pushed the band onto the world stage and made an obscure show about New Jersey gangsters into a TV hit. It is the first of many high points. Not that many of us could be much higher…

‘Bourgeoisie blues’ serves to remind how so many pretenders from the mid 90s fell by the wayside while this lot soared through the end of the decade and into the 2000s on the back of dance tunes that work as both acoustic numbers and pounding beat driven mash ups. Not that these folks ever felt subjugated by the rave scene. They plundered and subverted it. Taking what they needed in an audacious musical heist and leaving the meaningless hedonism to the ship of clueless fools. Nothing embodies the cool cynicism of their orchestral smash & grab better than ‘Ain’t going to Goa’ the tune that probably never gets played much in Goa itself. 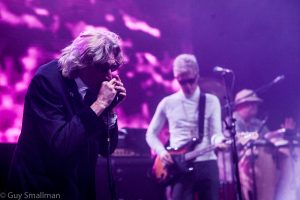 Of course one song was always going to be a stand out occasion in this set of many musical mountains. ‘Mao Tse Tung Said’ was D Wayne’s dance floor revolution. The banging track that melded mashed up mayhem with pure Marxism. Never forget that despite their excesses this crew always pushed a political and class conscious message that saw them playing those benefit gigs along with the festivals and arenas. The stage is bathed in deep red and 4,000 lost souls are for a short time feeling a fist raising affinity with North Korea; prior to being lured into the pious ecstasy of life in a joyous cult courtesy of ‘Hypo full of love’ and D Wayne’s 12 point plan.

‘The old purple tin’ pays homage to the drink of kings before ‘The night we nearly got busted’ properly raises the roof with the guidance of Rock Freebase’s slide guitar and the moody harmonica of Harpo Strangelove. It is at certain points a proper old school rave in everything but name and the merry throng are mad for it. The pulsating ‘Sister Rosetta’ keeps the place jumping until the beautiful finale of ‘Peace in the valley’ draws the service to close. Just wow… To hear this classic record in its entirety, as the lord intended, is an experience like no other.

We of course get a full encore kicked off by the mesmerizing ‘Hello I’m Johnny Cash’ and as many other newer classics as they can fit into the available time. As celebrations go this is completely unrivalled and somewhere up there the very Reverend D Wayne Love is looking down upon his adoring flock with approval as he necks another double shot and draws upon a massive blunt from that Graceland in the sky.