The sophomore offering from Manchester’s own Aerial Salad sees them hitting their stride-whilst being a nod to their growth as a punk band, Dirt Mall lets them bloom as an indie-rock anthem machine

I’m going to start this review with a disclaimer: I’ve been a friend and big fan of this band for a couple of years now, so this may come across as a conflict of interest. But in all honesty, having seen this album grow from rough acoustic voice notes on Messenger to the final product, and as a musician myself, I have never believed in a body of work this much. And I would have told them if I thought it was rubbish, anyway.

Jamie Munro, Mike Wimbleton and Matty Mills couldn’t be more authentically Mancunian if they were little matchstick characters in a Lowry painting. Luckily for us they’re not, they’re real people, and they’ve decided to use all their cheeky Manny charm to make album #2: Dirt Mall. Those of you familiar with Aerial Salad’s debut Roach will not be disappointed- Dirt Mall is certainly still Aerial Salad. The tone feels familiar, yet there’s undoubtedly a freshness to the sound. Recorded in one frenzied week at Unit 13 Studios in London under the watchful eye of Paul Tipler (who recorded Leatherface’s Mush, a favourite of the band) and Alex Wonk of Wonk Unit (and formerly The Flying Medallions- another key influence), they were in safe hands to produce something pretty special. The recording of Dirt Mall may have been fuelled by greasy spoons and questionable substances, but they didn’t come to mess about. Like any good album I don’t think any track deserves to be skipped, so I’ll go through them one by one.

The album begins with ‘Virtue’- a teasing guitar intro gives a sense of the sound that’s impending on this album. Munro’s vocals have matured since Roach, and are accompanied by backing vocals from Wimbleton for the first time. The addition of Wimbleton’s vocals throughout give this album a fuller sound than their previous releases, the final piece in the puzzle. I just wish the intro was a little longer on this one, to keep us hanging on a bit longer- imagine you’re at the top of Oblivion at Alton Towers (those who know, know). 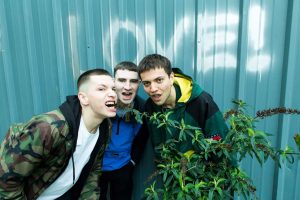 The strength of Munro’s songwriting comes through particularly strongly on ‘Fever Dream’ – lines like ‘tell me I’m not boring, I wanna be anywhere, anywhere but here with you’ are sung with a kind of delicate agony which feels candid and relatable. This album throws us from brash confidence to melancholy and insecurity- a yo-yo of mania and anxiety, but it doesn’t feel uncomfortable.

Next up is ‘Temp’, a reflection on Munro’s experiences balancing a temp job with chasing that rainbow of dreams, and convincing yourself you’re not going insane at the same time. ‘Every dream I dream, I dream for you’- an ode to themself, Munro produces a mantra for pushing on towards the life you really want. Similarly to Virtue, Temp features the sort of riffs that wouldn’t feel out of place on the likes of IDLES’ Brutalism.

‘Such A Pity’ exhibits the band really finding their feet as an indie unit. The melody is reminiscent of cult heroes The Cribs, and we’re gifted with yet another chorus you can’t help but sing back at your soundsystem. Wimbleton’s bassline really shines through on this song, intertwining with Munro’s bare vocals before the chorus kicks in. A nicely balanced track- somehow mournful yet uplifting. A guitar solo from Munro confirms any doubts in your mind as to whether The Cribs were an influence here.

‘Hahahaha you posers!’ Wimbleton taunts in the intro to ‘State O’Yer’. This song didn’t get released as a single, but is my personal highlight of the album. The build to the chorus is mastered on this track, and of all the songs on Dirt Mall I can see this one whipping up a frenzy in the DIY venues frequented by the band. ‘Give it up son/ I bet you look a fool on the dance floor’ chants Munro and Wimbleton, in what almost feels like a football hooligan style. All those hours they’ve put in on Football Manager must be coming through. I can just picture this live, being gleefully shouted back in their faces by the crowd- joyous.

The title track comes in at number 7 on the album. ‘Dirt Mall’ is a solid example of how Munro’s vocals and guitar, Wimbleton’s bass and Mill’s drums work cohesively. Another chantable chorus too. No complaints here where I’m concerned. If someone asked me to sum up what this album sounded like in one song I’d probably play them Dirt Mall, so quite apt that this is the title track.

This brings us to ‘Lazy’, the second song to have already been teased as a single. Lazy worked nicely as a standalone release, but in fairness, pretty much all the songs on Dirt Mall could have cut it as singles. Much alike a pair of your grotty housemates unwashed jeans, these songs stand up by themselves. Which segways us nicely into the subject matter of Lazy- blissful, unashamed, filthy laziness in all its glory. After the angst of the previous two tracks, Lazy slows us back down again. Allow yourself to be seduced by Munro’s laid-back crooning- ‘Oh God, I’m beautiful’.

We end our journey with ‘Stressed’. At the time of writing this has just been released as the third single from Dirt Mall. The strength of the mix comes through on this track, and sets this album apart from the pile of punk thrashers as something more considered and carefully constructed. This rings particularly true with the layers of Munro and Wimbleton’s vocals on the lines ‘so you wanna live a life of bliss/life like this/the answer is obvious cannabis/cannabis’. Mill’s drums get the final word on Stressed, and therefore the whole album- it feels well deserved.

The majority of songs on this album come in at between 2 and 3 minutes long. It feels shorter than it is- but like any decent rollercoaster ride, we’re left shouting ‘again!’ when it’s done (two rollercoaster references in one review…probably enough of that for now). As a body of work it feels complete; no song feels out of place, yet each one is distinct. Lyrically there has been growth since Roach, with Dirt Mall more focused on the experiences of the self rather than comments on wider society. This album feels like Munro is baring their vulnerability to the world, heart on sleeve, foot in mouth. Something feels more real about this than the output of other indie-punk outfits- like they’ve actually gone to a Working Men’s Club with their Grandads, not just pretended they did because Morrissey stood outside one in the Eighties. Anyone nostalgic for the Manchester powerhouse bands of the 90’s/00’s ought to be excited by this album. Dirt Mall stands to make Aerial Salad your new obsession, you just may not have realised it yet.