Dream Nails are self-described punk-rock witches on a mission to hex the patriarchy and have lots of fun whilst they’re at it. Since releasing their debut EP in 2016, Dream Nails have been shaking up stages across the world with their affirming feminist anthems, striking a chord with a whole new generation of punk fans and glittery weirdos. In August they played Rebellion festival in Blackpool for the second time, this time in the illustrious Empress Ballroom along with a fresh line up of up-and-coming bands such as Queen Zee and The Baby Seals, as well as punk legends like Descendents and The Damned. I caught up with Janey (lead vocals), Mimi (Bass) and Lucy (drums) backstage at Rebellion fresh from their set to chat about the politics that are so intrinsic to their mission as a band, from their involvement in the Solidarity not Silence campaign to their strong riot-grrrl influences.

So, first of all, how was your time at Rebellion?

Janey: It’s really fun to be back at rebellion. We played last year on the introducing stage, so to be invited back again to play this year on the main stage felt like a proper upgrade! To be able to have such an amazing crowd today was really cool. 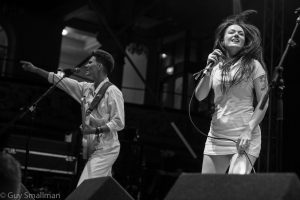 You’ve been quite vocal about Solidarity not Silence which is getting quite a lot of attention right now, what has been your involvement with the campaign?
Janey: We are really really close with one of the bands and one of the individuals involved. We played a fundraiser back in December before the whole thing was really public, because the fees that they have to raise for their legal defence are just extortionate, so obviously we just support it and would do anything we can to help them.
Mimi: All we can do is support our friends in those bands, because what they’re doing is just so important. It’s so shitty that they’re being taken to court, but they have to go to court to set the legal precedent.

Do you think this is going to be a turning point for women and nonbinary people who have experienced this kind of thing, not just in the punk scene but in performing arts in general?

Mimi: Yeah, because people will feel like they can speak up or have a voice even though they’ve been through a horrific time.
Janey: I think the reason that the Solidarity Not Silence case is so important at this time is because a lot of feminists talk about ‘breaking the silence around abuse’ and ‘speaking out’. Especially the #MeToo movement has promoted speaking out against high profile abusers, but actually the other side of speaking out is the fact that you will get sued for defamation, you will get taken to court, you will get publicly called a liar and dragged through the mud, so that’s the side of #MeToo and that’s the side of feminism and speaking out that we all need to show solidarity for and start rallying behind. Because that’s it, once you’ve said it you can’t take it back, and you are going to get attacked for it.

You are also very vocal about bringing women and nonbinary people to the front, is it generally well received at your shows and why is it so important?

Lucy: Generally, it’s very well received, and it’s always so amazing to see the women and nonbinary people have this amazing moment of empowerment where they just come together. Usually if it works well they are able to just expel any men that won’t stubbornly move to the back, and a lot of men actually really enjoy giving up the space and the allyship of moving to the back. It’s been called a ‘man creche’ before which is really funny! But there’s always one or two men at shows where it has to be a more heated campaign to get them out.
Janey: I think what’s interesting about calling women and nonbinary people to the front is that in the first wave in the 90’s, it was a safety thing, the pits of the 90’s hardcore scene were fucking violent and women would get their teeth broken. For us it’s about fun, joy is so vital, especially collective anger and collective joy, they’re so vital for our survival and those spaces are so rare. And we just see the joy on so many women and genderqueer peoples faces when they all surge to the front. They’re in a pit, they’re crowd surfing, those moments of joy are so so rare and they just would not happen if men were all just lined up along the front like at every other show.
Mimi: It’s my favourite part of the set, especially when you see people at the back and they gather up the courage to come to the front and you’re just like ‘omg yes!’ and by the end of it they’re just jumping around dancing, everyone is making friends, it’s such a special space and something I wish I’d had going to gigs when I was younger. We’ve all been groped in the pit, been pushed and touched in the wrong ways.
Janey: it’s like a social experiment. A gig is a public space like any other and when you’re challenging the norms of a public space some people are gonna get angry about that because they feel entitled to that space. 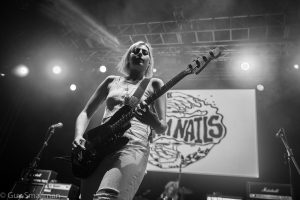 So there’s bands like you, The Menstrual Cramps, Queen Zee and Dream Wife all pushing this ethos at gigs. Do you think it’s a resurgence of riot grrrl, or a new incarnation of that?

Janey: All the bands you just listed are UK bands and I think we need to take a look at the political context we’re living in. We’re ten years deep into austerity, we have had three successive increasingly right-wing governments, now we have an absolutely hateful clown as prime minister. We live in London and it’s just a hostile exhausting place to live. Creating collective joy and spaces to be angry about that is a survival mechanism.
It is contagious though, we’ve had so many people come up to us after shows like ‘I’m gonna start a band! I just started a band! I’m looking for a bassist!’ Lucy taught herself to play drums, we get people DMing us for tips.
Lucy: One thing I just want to add, you said earlier about a resurgence of riot grrrl and solidarity not silence and whether this is a tipping point, maybe it’s the mood I’m in today but I don’t see these movements as a tipping point because it’s going to take a lot more systemic change and policy change and change in attitudes and mindsets and the way that children are raised. Even though it’s amazing and encouraging there is definitely a side to it which demands more work from us.
I see what you mean, if we’ve been promoting riot grrrl since the 90’s and we’re still suffering the same problems it’s not about to tip now.
Janey: Exactly. The revolution is never an event, it is long and slow and very gradual. It will take a generation of work.
Lucy: It’s from much more thankless jobs and tasks and action than being in a band which is fucking fun and powerful but it’s not going to change anything on it’s own.

So my final existential question is, do you think punk is still the music of protest?

Lucy: We talk a lot and think a lot about what punk actually is. I think in the traditional sense , the rebellion sense, even though it’s a fucking sick festival and we love all the old punks I don’t feel like it has as much protest power as maybe it once did and there’s something teenage about it, the anarchic boy saying ‘I’ll do what I fucking want’ is kind of lame and surface level and self-serving.
Mimi: The most punk festival we’ve ever played is a Christian festival called Green Belt. They did so much to be intersectional and inclusive and they had a bunch of artists from Palestine come over and they had drag queens perform, they were challenging a lot and they were all Christians.
Janey: They were radical, to have that space and the infrastructure of organised religion and to use that for good is punk as fuck. Way more punk than being in a little echo chamber where everyone is wearing black t-shirts, drinking beer, there’s not much radical and progressive about that, it’s just hypermasculine bullshit!

If you want to experience their world of witchy punk live, Dream Nails are holding a launch party for their newest single at London’s Old Blue Last on the 7th October, where they will be joined by The Baby Seals and Nadia Javed of The Tuts.