Don’t get me wrong, the punk scene is one of the warmest musical families you could possibly be adopted into, and I’m glad to have been welcomed with open, often sweaty, arms. However, I thought I’d take this opportunity to weigh in on some of my own personal experiences as a twenty-something woman currently operating in the DIY punk scene, as well as using this article to big up some organisations that I’m quite fond of. Going from a teenager tentatively introducing myself to punk on Spotify in my bedroom in Shropshire, to ending up smack-bang in the centre of UK DIY as part of Wonk Unit, the scene has given me more opportunities than I could possibly have imagined. Nonetheless, the road of not being taken seriously in my position as a female musician has been long, exhausting and fraught with eye-roll moments.

If we zoom out on the UK or even the global music scene, the first easily identifiable issue is representation: the number of female-identifying as well as trans and nonbinary artists is still much lower than you might expect. According to stats from Women In Music, the global music industry divide tips the scale at approximately 70% male to 30% female. This isn’t just for artists either, as Women in Music highlight that only 6% of recognised producers in the US and Canada identify as women. But what does all this mean for us in DIY punk? Surely, as the punk ethos dictates, we are better at opening opportunities for people from all walks of life regardless of factors like gender, race, or sexual orientation? Whilst we might be better in some respects at providing opportunities than the wider music industry, this doesn’t always mean that we take those given the opportunities as seriously as we ought to. Women do still form a minority of artists in the scene which is still predominantly made up of white men, and this can lead to our presence becoming a novelty. It is important to note that this kind of tokenism can similarly affect BME artists, as there is still little ethnic diversity in the scene. 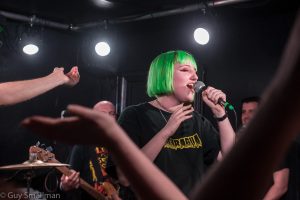 The initial assumption of being the wife/girlfriend of someone in the band (are WAGs a thing in punk now?) is one I’m sure many of my peers can relate to. Being accused of being the ‘token female’ in the band, being asked invasive questions about my sexuality, and my personal favourite, being told by a promoter that it’s ‘nice that they let the merch girl have a go’ are things that I have been baffled to experience. It’s 2019 for fuck’s sake, am I in some weird Carry On-esque time warp or something? On a more serious note, remarks like this play into a larger more subtle narrative that this isn’t our space to occupy and can trigger feelings of not belonging. This unwelcomeness extends into the pit and can grow into something more sinister; instances of sexual harassment and violence at gigs remain rife. One survey shared by The Guardian last year showed that one in five people attending festivals in the UK had been sexually harassed or assaulted whilst in attendance. Personally, I have always felt much safer at punk gigs than at bigger more mainstream shows, but that isn’t to say these things don’t also happen in our musical microcosm.

The main point I’m trying to make here is this; if the scene isn’t raising up female and non-male identifying creators in a way which takes them seriously, we become less visible in the scene, feel less welcome at venues and our voices get lost in the chaos. We need to walk the walk if we’re to talk the talk, and this means not tokenising or making non-male acts a novelty. This is not a call to start putting women on bills for the sake of it, more to change the discourse we engage in surrounding female-identifying artists. To quote a thousand feminist musicians before me: female fronted is not a genre.

If like me you are keen to tackle this situation head-on, there are several things you can actively do to earn your super-feminist punk scouting badge, including but not limited to:
-Calling out your friends and peers if they are (intentionally or not) tokenising or more generally being sexist towards female-identifying musicians & music industry professionals
-Listening to women in your circles when they tell you they have experienced this behaviour, and letting them speak for themselves
-If you really want to make an investment (time or money wise) into supporting female identifying, trans and non-binary individuals in the music industry, there are a number of organisations in the UK and beyond who would love your support such as the Girls Rock Camp Alliance (particularly Girls Rock London here in the UK), Safe Gigs For Women, and Girls Against. Girls Rock focus on encouraging girls and women (and they welcome anyone female-identifying, trans, or non-binary) to learn instruments as well as sound tech skills, using music as a confidence-building tool. Safe Gigs for Women and Girls Against focus on building a safe environment at gigs free from harassment and fear. There are TONS more, these are just a few examples.

Creating a respectful musical environment goes way beyond booking or wearing a t-shirt of your favourite female-fronted band, as much as these things help. It also involves being self-reflective and checking yourself on the more subtle sexist elements of our existence in the scene. The DIY punk scene is built on the fact that it’s music for anyone and everyone, so we need to reinforce this fact by not making those taking part feel unwelcome in their own home.