Rumours had been flying around the main Extinction Rebellion protest camp at Marble Arch in central London for a few days. A very big name was going to be playing the site a visit and playing on the same stage that Alabama 3 had arrived upon to kick things off a few days earlier. By Friday of the Easter weekend the official twitter account had announced a special appearance by the previously unheard of ‘Stroud Green Village Band’. By now certain trip hop superstars from Bristol were being touted as the anonymous act.

On Sunday people arriving at the site immediately noticed that the 3K rig which had been more than adequate for the previous bands and speakers had been replaced by a state of the art 12K monster. Two screens with powerful rear projectors were also set up either side of the stage to provide visuals. Something big was definitely lined for the demonstrators and their supporters who’d held this site now for over a week.

Then after a key speech in the evening from much acclaimed Swedish activist Greta Thunberg it was announced that the Massive Attack sound system would be performing a live mixing set an hour later. Speaking to the site organisers after the announcement they revealed that the secrecy around the announcement had been enforced due to health and safety considerations. They had clearly made the right decision. By the time that the set was due to start several thousand people had responded to the frenzy erupting on twitter and elsewhere filling the sizable area in front of the stage. Had the news leaked out a day or two before then the volume of the crowd would have been unmanageable giving the organisers a potentially dangerous situation and the police an excuse to close the event down. 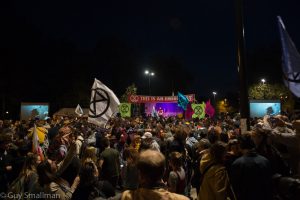 Founding member Robert (3D) Del Naja and Cuts arrived on the stage to a roar from the crowd and went straight into a remix of ‘The Wheel’. A fitting track to start with, as it is long believed to be an anthem about climate change, with lyrics like: “The wheel keeps turning the sky’s rearranging, Look my son the weather is changing“. From this point on they were on an absolute roll mashing up a variety of numbers ranging from their own songs to classic tunes by The Clash.

For many the sight of a band who headline Glastonbury playing on the back of a trailer for a modestly sized crowd of activists is surprising. Those of us who’ve followed the progress of this act since the early 90s expected nothing less. They have long worn their political hearts on their sleeves. We well remember them bringing a similar version of this show to the squatted UBS bank during the occupy protests in the City of London in 2011. 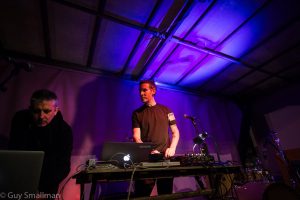 Members of the band have also publicly worked with human rights lawyers, opposed the Iraq War, the billions being wasted on Trident renewal and visited refugee camps in Lebanon where they later donated towards children’s educational projects. They have also refused to tour in Israel since the instigation of Boycott, Divestment and Sanctions. The set at Marble arch was also accompanied by visuals projected onto the screens, which appear to have been specially prepared for the occasion featuring the Extinction Rebellion logo and numerous images of environmental damage and resistance to it. It also has to be reported that the sound was absolutely perfect and at a very pleasing yet utterly pumping volume from beginning to end.

This #EarthDay the police have swarmed and taken the sound system from the @ExtinctionR stage at Marble Arch pic.twitter.com/7KjD8MfnRN

The following evening the police used Criminal Justice Act (95) legislation to occupy the stage and confiscate the rig and related equipment. They cited several noise complaints coming from guests staying at the many luxury hotels that surround Marble Arch. At the time of publication the police are still holding the equipment as “evidence” which seems a like an unnecessary expense to the tax payer as well slightly unfair on the hire company who we understand had no knowledge as to where the PA was heading to.

Another well known Bristol act to show up at the site was internationally renowned street artist Banksy who appears to have decorated a wall near Marble Arch with a piece that celebrates the success of the protests with the words: “FROM THIS MOMENT DESPAIR ENDS AND TACTICS BEGIN”. There is little doubt that the protests, which lasted ten days, caused mass disruption and saw over a thousand people nicked were seen as a step forward by the organisers. They achieved huge amounts of public sympathy, very many celebrity endorsements and managed to get the media to talk about something else other than the ongoing idiocy that is the governments handling of Brexit. 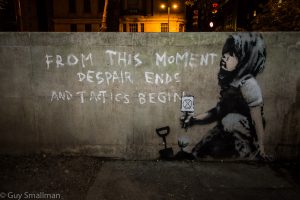 Although there has been no confirmation from Banksy himself several experts have declared that the artwork is genuine meaning the wall in question now has a value of over a million quid. There has also been the usual online speculation that this is further proof that Robert from Massive Attack and the mysterious artist are the same person. While it is kind of fun to imagine that 3D leads a double life as the stencil graffiti answer to Batman, we can confirm (from several friends whom know both persons) that this is not the case.